London is always full of wondrous theatre for children but it pulls out the stops at Christmas. Theatre at its best is a form of celebration and, as December closes in and the school holidays beckon, there is simply no better time to see a show. From Brothers Grimm to Walt Disney, from old fashioned clowns to 21st century fairy tales, London theatre has something for the child in everyone. Claire Allfree selects five of the best. 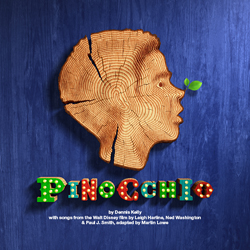 If you’ve been lucky to get a ticket for Harry Potter and the Cursed Child then you’ll know all about the fabulous theatre wizardry of that show’s director John Tiffany. He’s back at the National sprinkling more of his magic, this time on to one of Disney’s favourite characters, Pinocchio, the mischievous, adventurous little boy puppet who must learn honesty and loyalty if he is to become the real life son of gentle old Geppetto. With a script by Dennis Kelly, who wrote the West End smash hit Matilda, and newly arranged songs from the original Disney movie, including When You Wish Upon A Star, if you see one Christmas show this year, make it this one. Ages 8+. Pinocchio is also the theme of Perform’s February half term holiday courses. Find out more.

No, not the story of the girl who grows up in the forest after escaping the clutches of her wicked stepmother but another fairy tale, also collected by the Brothers Grimm. This one involves two very different sisters whose friendship with a bear over the course of one winter has unexpected consequences. Battersea  Arts Centre can always be depended on for a richly imaginative Christmas show and, with theatre company RashDash at the helm here, expect an invigorating update of a very old story. Ages 5+. 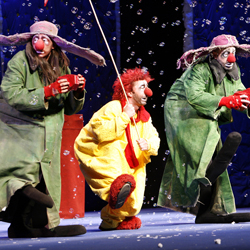 There is a reason why this international hit keeps on rolling: there is simply nothing like it. Not a great deal happens – instead the show’s creator Slava has conjured up a largely wordless dreamscape populated by a bunch of artful comic clowns who tap into an elemental sense of wonder and which culminates, famously, in a ticker tape blizzard that smothers the auditorium. A surely welcome antidote to thrills-a minute, CGI, big screen entertainment. Ages 8+.

Jack and the Beanstalk

Panto in London is a serious business, with Hackney Empire and Theatre Royal Stratford East providing major competition for the best in town. But my money is with the Lyric Hammersmith which each year serves up a street-smart show steeped in theatrical invention, effervescent chaos and a wit and silliness that keep adults and children equally entertained. This year’s panto is Jack and the Beanstalk and it comes with the added bonus of Vikki Stone as Fleshcreep; her performance as Abanazer in Aladdin at the same venue last year was the best of the season. Ages 6+.

Tall Stories are best known for their Julia Donaldson adaptations but, to accompany a year-long season of Oscar Wilde in the  West End, here they’ve reimagined the fairy tales written by The Importance of Being Earnest author instead. Watch characters from  The Happy Prince and The Nightingale and the Rose come to glorious new life in this brand new piece, steeped in Tall Stories’ inimitable mix of music, comedy and make-shift stage craft. Ages 5+.