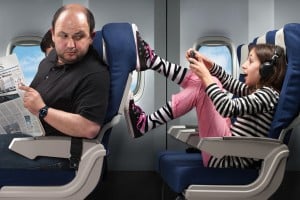 What constitutes rudeness these days? Tim Lott looks at generational differences and wonders if adults are getting their comeuppance.

One of my most vivid memories of childhood is that of my father – a peaceable, self-controlled man who rarely lost his temper and never raised a hand to me – pinning my elder brother, then about 16, against the wall by the throat.

What was the offence that had so gravely offended him? It was simple. He had sworn at my mother. After this experience, my brother never made that mistake again.

This was 40-odd years ago. I am now a father four times over myself and things have changed. If I grabbed my eldest daughter by the throat every time she was that rude to me – or even once – I would probably have had her removed from my care a very long time ago and possibly found myself under investigation by the Met. Mainly,  I just grin and bear it or tell her that I find her remarks offensive – not that it makes the remotest difference to her potty mouth.

Admittedly, she’s technically an adult now, but she was not that much different as a child – combative. No, let’s just say, ‘rude’. Now I’m not really one to talk, I confess. I was a very impolite teenager, albeit mainly through being sulky and uncooperative. I never remember swearing at my parents though, or at any adult for that matter. That was a bridge too far.

There has undoubtedly been a shift in the wider code of behaviour between children and adults.

However, I’m not going to go into a ‘the trouble with this younger generation’ rant. My four daughters, including the eldest, are all pretty amazing and usually display better manners than me. However, there has undoubtedly been  a shift in the wider code of behaviour between children and adults.

As a child, I remember it being common for children to give up their seats for adults on a bus or train. Now it’s the other way round – adults will often, and inexplicably, make way for perfectly able-bodied children as if the kids were nobility and they the serfs. Which is kind of the way I often feel nowadays.

There are also new forms of rudeness being practised today. Notably, playing with mobile phones or screens while eating meals. Or while having conversations. Or while watching other screens. This screening fetish strikes me as completely beyond the pale – but for this generation it just appears to be normal. When I complain about its rudeness, I am treated with uncomprehending stares. Or I would be if they could be bothered to look up from their phones.

Sometimes, this attitudinal deficit, when performed with sufficient innocence, can be funny rather than offensive. When my youngest, now ten, but then five or six, stood up in outrage after being asked to do something she didn’t want to do and announced to me, with some aplomb, ‘You’re just a pathetic little man’, I couldn’t really reprimand her because it was just too funny.

Perhaps we adults are simply getting our just deserts. After all, until quite recently – and actually I’m sure it still happens often enough – adults were extraordinarily rude to children, just because they were bigger.

Grown-ups could call them stupid, incompetent, lazy, brats and much besides without fear of societal reprimand. All these things were admittedly true of me as a teenager – but it was very impolite, I felt, to point it out.

Nowadays, we’re meant to be examples to our children. Which means they can be rude to us while we can’t be rude to them. Which, more often than not, nowadays strikes me as a load of cobblers. To put it politely.