Actors are the most resourceful people I know 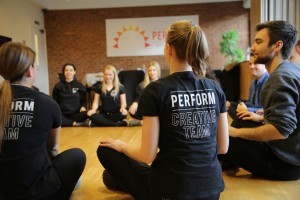 As somebody who has worked with actors for over 20 years, I very rarely meet one who isn’t incredibly motivated, eager and keen to work in their chosen profession or in other fields.

I suppose it's because acting work is hard to come by so you have to be flexible and resource and find other jobs to pay the bills.

A few years ago, Glenda Jackson, who was then my local MP, came to a Perform class in Hampstead (her constituency) to speak to the children. These children were 7-12 year olds and she gave them some theatrical words of wisdom, which were that, if they wanted to tread the boards in later life, they also had to have another job that they loved to do whilst they were not acting. Surprising words coming from someone who has won two Oscars!

Another reason actors are like this is because of their training.  When you are improvising on a daily basis, you learn to think on your feet and this stretches your critical thinking skills. You play different characters and so you have to put yourself into other people’s mindset. So, if you’re suddenly given a new task to do, you're confident to try it, even if you might not fully know what you’re doing at the start.

This sort of approach is behind a lot of what we do in Perform classes. For example, this term, the children will be improvising being a Ringmaster or a flying trapeze artist in the Circus and it’s this sort of activity that gives them the confidence and creativity then go on and deal with other situations in their lives. It might be via their imagination in class but, in real life when something happens, having learned to think ‘outside the box’ can really help children adapt to what is thrown at them.

As I sit in my office today, I’m looking around at an office full of actors. They are on the phone talking to parents, speaking to schools, booking in workshops and working on our costumes for the Perform Shop. None of these jobs they were trained to do, but their training makes them adaptable, quick at learning and receptive to learning other skills. More importantly, they all have the confidence to have a go.

What is a shame is that these soft skills aren’t really valued in our education system. They are in independent schools, who have the budget for regular music and drama productions but, as my many secondary drama school teacher friends tell me, drama is slowly being removed from the curriculum in the state system.

However, if your child doesn't go to a private school (or even if they do!), you can still give them that experience at Perform so do give us a call on 020 7255 9120 and see the difference that we can make to your child's creativity and resourcefulness.