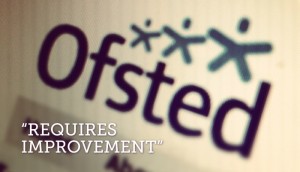 Most parents of school-age children will have read (or at least scanned) an Ofsted Report and these undoubtedly play a major part in the choices we make about schools for our children. The best schools attract the most aspirational involved parents while the worst are invariably the final option for the disappointed or those with no other choice.

Currently, a school can be marked as Outstanding, Good, Satisfactory or Inadequate. However, the Head of Ofsted, Sir Michael Wilshaw has said that a "satisfactory" verdict isn't good enough. The former "satisfactory" schools will now be re-labelled as "Requires Improvement" and the report will make clear exactly what needs to be improved. In addition, the school will face a full re-inspection within 12-18 months.

It's not hard to see the logic behind this idea. Our children only have one opportunity to be educated and a school which is only "satisfactory" is surely not one that most parents would ideally choose for their children. And yet, from the school's point of view, "satisfactory" can be taken to mean that the school is fulfilling all its obligations and nothing absolutely needs to change. Sir Michael Wilshaw clearly feels that this sort of complacency and acceptance of "just good enough" needs to be guarded against if our children are to have the best education.

While I applaud this sentiment, I do feel that the change may not achieve its aim and could even be counter-productive.

Removing the middle ground of "satisfactory" creates a black-and-white cliff-edge which may not be ultimately helpful to teachers or parents. The decision between an overall verdict of "Good" and "Needs improvement" might be down to something very small (or an accumulation of tiny things) but the negative impression it makes to outsiders is loud and clear. I'm all for the highest standards of teaching but is it helpful to label a school which is generally doing okay as inadequate? Might this not begin a vicious circle as the middle-class parents and ambitious teachers desert what they perceive as a sinking ship for greener pastures?

Even worse, given the effect that a demotion like this could have on the morale of the teachers and the views of prospective families, isn't it likely that inspectors might be reluctant to press the "nuclear" button and mark schools down? If so, the effect will be preciously the opposite to the one intended and we may start seeing many more "good" schools which, under the old regime, would have been "satisfactory".

Surely the problem here is not the existence of the "okay" but our acceptance of it as "no change required". Removing the word "satisfactory" does not in itself eradicate the schools which are ticking all the right boxes but failing to do anything really "good" or "outstanding". We all understand that there are middle-of-the-road schools just as there are restaurants, hotels and relationships which are "satisfactory" but nothing special. That's why exams are graded A to F. The middle-ground may not be acceptable but it does exist.

Yes, we all want our children's schools to be A grade but perhaps the way to achieve this should be about increasing the frequency of inspection for satisfactory schools until they become good or outstanding and putting in place greater incentives for staff to achieve this. Rather than denying the existence of "satisfactory", just putting in place a regime that makes it clear that "satisfactory" is simply not good enough.

It's a difficult area and one which attracts strong views from teachers, parents and the government. I'd be very interested to hear your views.

From VideoPortal 17th March 2017
"the Ofsted complaints procedure too often seems constructed around a deep and dutiful need for self-protection. Thus an inspection system that demands transparency from schools refuses to release its own inspection notes, When challenged, it dares us to resort to a Freedom of Information request and then rejects those same requests because they don’t conform to a definition of “public interest”.
020 7255 9120