Team Elsa or Anna - who's the winner? 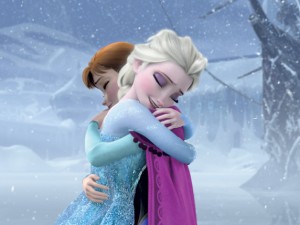 We’ve just released details of this year's Summer Holiday courses and I'm excited to say that we’ll be putting on mini-musical versions of The Ice Queen for 4- 7 year olds, inspired by the global phenomenon, Frozen.

Putting together the songs and dances for this week got me thinking: when Frozen came out at the end of 2013, like many other millions of people, I was hooked from the start. I’m a bit of a Disney Musical Movie obsessive anyway and Frozen is just one of a number of their films that I adore.

But what interests me the most is the fact that most little girls want to be Elsa more than Anna. More Elsa costumes are sold than Anna and this is evident when you go to a birthday party and see the sea of blue sparkly costumes rather than the less flamboyant purple/green ones.

When I first watched Frozen, I was adamant that Anna was the heroine and so I’ve been puzzled ever since as to why most girls prefer and want to be, Elsa. Anna is optimistic, funny and brave whilst Elsa is constantly withdrawn, sad and angry.

Of course, the popularity of the song Let it Go that Elsa sings and the sparkly dress that she transforms into wearing are obvious reasons to be on "Team Elsa". But can it just be that?

I don't believe so and I've put together a list of other reasons which could explain why the character of Elsa rather Anna is the most popular with little girls:

Who knows? I’d love to hear if your child is an Elsa or an Anna fan and why that is. Or maybe they’re neither and have plumped for Olaf - the funny, lovable one?

The Ice Queen Holiday Courses are for 4-7 year olds and will be running all over London and the South East throughout July and August.  Find your nearest venue here then book before 1st June using offer code EB010615 to receive a 10% discount on the course fee. Call us on 0207 255 9120 or book online.

From Cat 14th May 2015
I'm afraid it's because she's more visually attractive. Little girls are totally tuned in to that - they are human and have human instincts about attractiveness hard-coded. Sad but true.
020 7255 9120