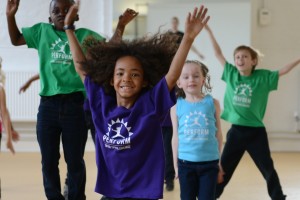 We're big fans of the classics here at Perform. We always use a famous children's book to adapt for our holiday courses. For example this year we'll be flying to Neverland for February half term, and tumbling into Wonderland over Easter.

It's so exciting to be able to share these amazing stories with children keeping true to the actual story. Introducing them to a captivated audience of new children is truly magical.

But currently, I'm most thrilled about the marriage of history and hip hop that we're doing in our street dance Perform X classes. Over the past year, we've produced three tracks and performances which tell historical stories through rap and hip-hop  (a bit like in the hit musical Hamilton).

Last term, to commemorate the 350th anniversary of the Great Fire of London we performed Burn London Burn which was a dramatic retelling of the fire from how it first started with a spark on Pudding Lane in 1666.

Our dance routine for the spring term, Jailbreak, is based on a notorious prison breaker from hundreds of years ago called Jack Sheppard. Jack was born in to a poor family on 4th March 1702. He started to train to be a carpenter but, with only one year left of his training, he turned to a life of crime in 1723. He was a poor thief but turned out to be amazing at breaking out of prison. In fact, Jack was arrested and put in prison five times but incredibly managed to escape four times!

His first escape only took three hours. His second escape took a couple of days. But it was his final escape that was the most daring. He unlocked his handcuffs and removed the chains using a small nail. He tried to climb up the chimney but his path was blocked by an iron bar. He removed the bar and used it to break through the ceiling. Jack then broke through FIVE locked doors to get into the prison chapel, then onto the roof. Realising he couldn't get down on his own, he went all the way back down to his cell to get a blanket, then climbed back onto the roof of the prison. He used the blanket to reach the roof of the house next door, broke into the house, went down the stairs and out into the street still in his leg irons. Sadly for Jack he was later caught and sentenced to be hanged but his daring escapes had made him the most famous man in England and, more than a hundred years later, anybody by the name of Sheppard was still automatically referred to as "Jack".

The physical nature of Jack's escapes, his groundbreaking celebrity and his rebellious bad-boy persona mean that hip-hop is the perfect way to tell his story. I think that children really love learning about historical stories -often the gorier the better if Horrible Histories is anything to go by! So if we can improve children’s fitness and a fun way and teach them something new at the same time then all the better!

Perform X street and hip hop dance classes for 6-12s are available in over twenty venues across London and the South East with more openings scheduled. Find your nearest venue online along with details of how to sign-up for a FREE no obligation trial.