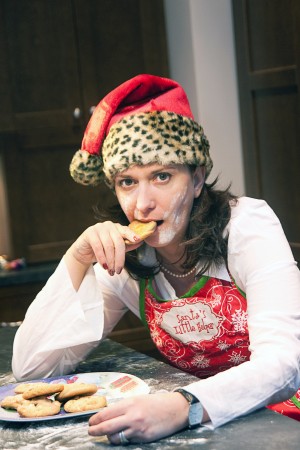 As the festive season gets into full swing, mum of two, Jo Wiltshire, reflects on the never-ending exhaustions of Christmas with children.

The first signs appear around the end of August, hot on the tail of your summer holiday, just as you’re scraping the last of the summer sand off their flip flops and heading to the shops to buy pencils, pens and new school socks.

There they are, on the supermarket shelves – those first little foil-covered Santas, an army of them, smiling jauntily at you as you peruse the aisles unsuspectingly.

It’s assault by stealth. Before you know it, Wizzard is wailing ‘I Wish It Could Be Christmas Every Daaaayy’ as you contemplate the fact that you are still wearing shorts on the school run.

Several friends helpfully put up Facebook statuses informing you that there are only 21 Mondays left before Christmas, and you feel a mild surge of panic that you haven’t started your lists yet. Any lists, not even Back-to-School ones.

‘I’ve done my Christmas list,’ my son tells me, offering it to me on outstretched palms, with the solemnity of a senior civil servant presenting a document to the Prime Minister.

In September?, I query tremulously.

A quick scan: the usual heady mixture of a ‘Top Ten’ toy I will have to hunt down with the tenacity of Liam Neeson on a good day, peppered with several requests for random, impossible but very precise items that don’t exist in ANY SHOP EVER.

Example: a mongoose with a moustache in a blue and yellow striped jumper (this is non-negotiable) with your child’s name embroidered in green across the front?' In green, Mummy, you understand?’

There they are, on the supermarket shelves – those first little foil-covered Santas, an army of them...

Santa’s going to be a busy man this year, not to mention handy in the needlework department. ‘But Mummy, he’s magic so he can make anything in his elf factory, right?’

‘Right sweetheart. Yes. Absolutely.’ Sigh. At school, the children are whipped into a frenzy of festive creativity. Much of it involves glitter. Lots of glitter.

(Who invented glitter, by the way? It surely is the creation of people whose vacuum cleaners are better than mine and who deserve a reserved seat on the Ninth Circle of Hell.)

And they talk to each other. This is a Bad Thing. ‘What are you getting for Christmas?’

‘A gold-plated diamond-encrusted iPhone X with a personal butler to carry it around for me...’ Cue the sound of crashing expectations and the dawning realisation that Life Isn’t Fair.

Eventually, you and your children achieve that all-hallowed state of Nirvana called ‘End of Term’.

You have by now cultivated a malevolent dearth of Christmas joy. If you see one more ‘fun’ Santa hat perched on an adult’s head (in a bank, seriously?) you’ll make Bad Santa look like a nativity cherub.

You are glassy-eyed with exhaustion, dreaming of quiet padded rooms and anything resembling a bank balance.

You crawl towards the finishing line, hand outstretched piteously – surely soon a sit-down and a bucket-sized Baileys will be yours! But no – first the wrapping. What, did you think Santa was going to do it?

By the night before Christmas, though – or at least by 2 or 3 in the morning – you start to feel that warm fuzzy glow. The children are slumbering peacefully, the presents are ready, the sprouts peeled, the turkey at the ready, you’ve even managed to find a manky carrot and a mince pie to leave out. And you’ve bought ALL the batteries, enough to power a small gadget-infested planet. You ease your achey limbs into bed and drift into sleep, a small satisfied ‘I’m a good Christmas mummy’ smile on your lips. You are allowed precisely three hours and two minutes before you hear ‘Mummy! He’s BEEEEEEN!’

Here we go! Time to rise and shine, be merry, partake in the festive whirl of happy children, laden tables, basted turkeys, missing plastic parts, grumpy relatives, sick dogs (who left that chocolate Santa there?), uneaten sprouts, burnt parsnips, old films, crowded sofas, and many, many new socks, mostly adorned with reindeer or mistletoe, which will be a good look for precisely seven more days only.

You find yourself grinding to a halt. You think you might be dribbling on your best cushion. A far and distant voice permeates your festive fog.

‘Mummy? Can you help me build this 15,000-part castle, Mummy? It will ONLY take SEVEN hours, it says. Mummy... why are you asleep Mummy? Daddy, I think Mummy is broken!’

No, not broken. She just needs her batteries replacing. Please note for next year: always buy more batteries than you think you’re going to need.