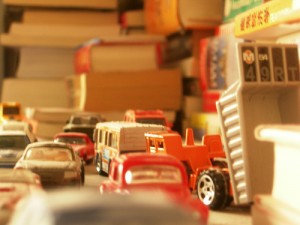 Many of us make trips to visit family and friends around Christmas and of course over the New Year.

As such I get lots of questions from frazzled parents enquiring whether I have any tips to make those long Christmas car journeys go smoothly.

Well, smoothly might be pushing it somewhat - but I certainly have some suggestions which hopefully you'll find useful.

You were in the Brownies, right? Or the Scouts? No? Well back when I was a Brownie the motto was "Be Prepared", and preparation is everything. Before you set off, plan your route and rest (toilet) stops. Also decide when you're going to be driving. Make sure you take snacks, drinks etc. with you.

It's also a good idea to talk through your plans with your child (provided that they're old enough to understand of course) - so that they have an understanding of where you're planning to go; when; and how long it's going to take to get there.

I'd suggest considering doing the drive at night (obviously, this assumes that you're quite happy driving on the roads at night) as it does have its advantages. The roads are often quieter - so you'll be less likely to be held up in traffic jams which can cause as much tension as squabbling little ones in the back seat.

There's also a fighting chance that your children will sleep for some or all of the journey. If you are travelling at night, I'd recommend that you pop your children in their pyjamas before you set off. Also take blankets, pillows and so on to encourage them to snuggle up and drift off to sleep.

Games to Play in the Car...

Bear in mind however, that even if you do decide to drive at night, your little angels may not play ball and drift off to sleep as you've been hoping. It's therefore a good idea to have an armoury of games up your sleeve to keep them occupied; and of course if you are planning to make the journey during the day you'll definitely need some games to distract them.

There's nothing wrong with pulling out the old family favourites like having a sing-song, or playing 'I Spy', they've kept us amused on lots of car journeys, but I thought I'd share a couple of the games which we play at Perform so you can mix it up a little:

This game is a little like 'Consequences' - each person in the car takes it in turns to contribute a line of a story. Explain that together you are going to create an imaginary character. You begin by giving him or her a name. Then take it in turns to build up their appearance and character e.g.:

"His name is Charlie, and he has a green nose"

"He is wearing a red jacket"

"He is a little bit shy"

"He is scared of spiders"

Go on to create an adventure for him - where he goes, who he meets there, what he gets up to and so on.

Yes or No Game

This is a great game which you can take it turns to play. The rules are simple - one person plays the game whilst the others take it in turns to ask questions. The only catch is, no matter what's asked they can't answer yes or no - e.g.:

"Do you have any brothers or sisters?"

If the person being questioned answers yes or no, switch over so someone else can take a turn answering the questions.

Harder than it sounds actually! Take it turns to think of a subject. You must talk for 15 seconds on the subject without leaving an long pauses, or saying er or um.

This is an alphabet game. Go around the car, and each person has to say

"The magician's cat is an

Then continue through the alphabet with everyone taking a turn.

Got any tips of your own to survive car journeys? Or games which you play? I'd love to hear about them - drop me a note in the comments. Oh, and good luck with your car journeys over the festive season!

From Bruce 19th September 2011
I can say from experience that having games to play in the car is so important! It can be the difference between a dream vacation and a nightmare.
020 7255 9120