10 Things you never knew about Neverland 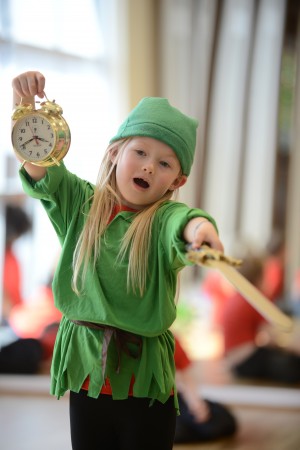 The infamous tale of the boy who never grew up captured imaginations over 100 years ago and  continues to do so today. Over the decades, it has entered popular culture on a level that few literary works ever do, evolving along the way and influencing everything from films and literature to the English language itself. Here are just a few things you may not know about JM Barrie’s magical masterpiece...

Originally Peter and the Lost Boys could fly unaided, but the art of flying captured imaginations so much that there were several reports of children injuring themselves attempting to fly from their beds. After this, Barrie cleverly added Fairy Dust as a necessary factor for flying.

2. Peter Pan was originally a play

“Even those who least relish it must admit that no such play was ever seen before on any stage. It is absolutely original — the product of a unique imagination” read the rave review from The Guardian after the first stage version opened in London in 1904. Barrie later adapted and expanded the play's storyline as a novel, published in 1911 as Peter and Wendy.

JM Barrie gave ALL the rights to Peter Pan to Great Ormond Street Hospital. When asked about the surprise move, Barrie explained the impetus for his gift: “At one time, Peter Pan was an invalid in the Hospital… and it was he who put me up to the little thing I did". Barrie requested that the amount raised from Peter Pan should never be revealed. To this day, the hospital has always honoured his wishes.

Rumour has it that Wendy was a boy’s name before Barrie popularised it. Depending on where you look, the name Wendy either didn’t exist before Peter Pan or existed only as a male name. Apparently, the inspiration for the name came from a small girl who referred to him as her 'friendy' – ‘fwendy’ or ‘fwendy wendy’. After the story rose in popularity uses of the name soared. Today, however, it's on the list of names at risk of extinction.

5. Sadly the real Peter Pan never did grow up

It’s believed that the concept of Peter Pan is based on Barrie’s older brother, David, who died in an ice-skating accident the day before his fourteenth birthday. In the minds of Barrie and his mother, David was in fact, a boy “who would never grow up.”

In the original play, Hook’s last words are “Floreat Etona”, the Eton motto, roughly translating as “May Eton Flourish”.  To this day no-one knows who the character of Captain Hook is based on but in a lecture on Hook, Barrie indicated that disclosing the identity of this character would create a scandal as he was someone of great importance.

7. There were no Wendy Houses before Peter Pan

There may not have been any little girls called Wendy before Peter Pan but nor were there any Wendy Houses either given that it was the story that coined the term. The original Wendy Houses was built for Wendy in the Peter Pan play.  After Wendy was shot by a Lost Boy Tootles after arriving in Neverland, Peter Pan and the Lost Boys built a small house around where she had fallen.

8. No-one was ever ‘in the doghouse’ before Peter Pan either

In Chapter 16, Mr Darling consigns himself to the dog's kennel as an act of remorse for inadvertently causing his children to be kidnapped. This appears to be an obvious source for the phrase 'in the doghouse' and several etymologists have confidently stated it to be just that. However, the transition from the British word ‘kennel’ to the American word ‘doghouse’ is less clear.

9. Peter Pan was nearly The Boy Who Hated Mothers

One of the working titles for original the play was The Great White Father and Peter Pan or The Boy Who Hated Mothers. Fortunately, producer Charles Frohman convinced Barrie to change it to The Boy Who Wouldn’t Grow Up. Would the play have been so popular with its original title? Who knows!

Barrie was friends with some of the most important writers of the time and even set up an amateur cricket team that included Arthur Conan Doyle, George Bernard Shaw, H.G. Wells, Thomas Hardy, Rudyard Kipling, P.G. Wodehouse, G.K. Chesterton and Robert Louis Stevenson.

In fact, not only were Stevenson and Barrie well acquainted, so too were their fictional pirates. Captain Hook, wrote Barrie, was the only man ever feared by Treasure Island’s Long John Silver.

This summer, we couldn’t think of a better story to inspire young imaginations which is why we’re treating our 4-7s to a Neverland adventure. Your child could fly away with Peter, Tinkerbell and the Lost Boys on on of our fun-packed drama, dance and singing course. Find out more here.