How to fuel a child's creativity 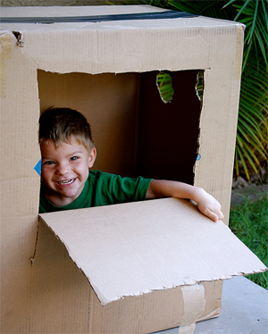 Did anyone else cringe when they read about Tamara Ecclestone’s two year old daughter’s latest gift? She recently received a £10,000 playhouse which is also a replica of their £70 million Kensington mansion. If you haven't already seen it already, click here.

As a mother who works with children on a daily basis,  one thing that strikes me is that elaborate toys like this aren’t actually more beneficial for the child at all. What’s more, spending all the money in the world doesn’t mean that you are giving your child the best.  If you take away her wealth and celebrity, Tamara Ecclestone’s daughter is just a normal two year old with the same basic wants and needs as any other little girl.

I think that children learn better when they use their imaginations. I suspect that this little girl would have probably been just as happy playing in the box the house arrived in as the house itself. Where’s the imagination in giving a child an enormous replica of your own house anyway?

I am proud to say that, in our Perform workshops, we are prop-free. I don’t believe in giving children an object or prop to use - it’s much better to stretch their imaginations by asking them to visualise and describe something from that. You then open up their minds. After all, anyone can describe something they see in front of them.

One exercise we do is asking children to close their eyes and imagine how something would look, before asking them to share their invention with everyone. This is a much more beneficial exercise for fuelling their creativity.

Often when we visit schools with our educational workshops on a topic such as Ancient Greece, afterwards the teachers comment that they thought visual props and aids would be used. They are frequently surprised at the fact none were needed at all yet the children learnt more than just sitting around and looking at artefacts.

I’m not saying that children shouldn’t have any toys or items but I think most people will have experienced that exasperating moment when you give a child a present and they turn around and play with the box for hours on end! It just proves that, in spite of living in a hugely materialistic society, often the most basic items are the most appealing.

In spite of her privileged upbringing, I do hope that the obviously much-loved Sophia Ecclestone did get to play with the playhouse box (or part of it, given the size!)

From Maggie 13th May 2016
Brilliant work Perform. There is no better inspiration for a child than an adult interacting with their imagination .
020 7255 9120