Is your child a fussy eater? 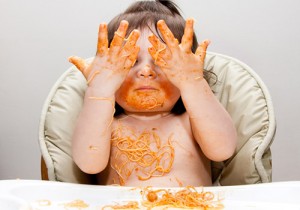 I came across an article yesterday by Spanish paediatrician Carlos Gonzalez and its title, “What to do if your child won’t eat” grabbed me because I have two extremely picky little eaters at home aged 5 and 7, which is a source of constant despair and frustration to my husband and me during mealtimes.

I’ve realised that I’m a mum who has food envy. I sit in awe whilst other children demolish their meals and my own two just sit and pick away at theirs. It doesn’t matter what it is, they just don’t ever want to eat a ‘normal,’ child-sized meal. As you can imagine, I’ve done everything from pleading, to bribing, to praising to try and improve this.

But still it makes no difference - neither of them seem to have very big appetites (or care that much about eating), and in fairness, apparently neither did myself or my husband when we were children.

So it was quite refreshing to read the article yesterday, which you can access here.

When asked, “How should you get children to eat?” Dr Gonzalez, who is known for his outspoken advice says, “Never try to force a child to eat. Neither by force nor by persuasion, coaching, bribing, distraction or any other method.”

In his opinion, forcing children to eat (presuming that the food being forced is healthy) means that children end up hating healthy food. His message to parents of fussy eaters is that that we should just leave them alone.

In fact, Dr Gonzalez states that the parent is the problem and not the child. He says, “Your child is already eating well, it's you who have to change”.

It’s tricky though isn’t it? Because at the end of the day we are the parent and know what is good for our children, and eating well is obviously extremely important.

So how can you just leave your child alone to not eat very much? I find it hard to imagine that I could ever just sit there and let them eat as much as they want, without intervening. But maybe he’s right? Maybe some children just don’t need to eat as much and making a drama out of it doesn’t help the matter anyway. I might just experiment with this over the next few days and see how it goes.

Do you have a fussy eater? And if so, how do you feel about “leaving your child alone”? I’d love to hear from you.

From Tania 18th April 2015
I agree with Ysabel. I used to worry too much what my 5 year old son was eating and how much. Now I do exactly the same as she does - sometimes he moans that it isn't what he fancied or he doesn't like it, but he know there is nothing else and the only other option is bed (and certainly no dessert). 90% of the time, if it is something new and he tries it, he likes it. If he tries it, but genuinely doesn't get on with it, I might let him have a simple alternative - usually fruit and veg heavy, so that he doesn't wake up hungry (which has happened!) Either way, we make a big deal out of it when he tries something new, so he feels really good about it. I would say that overall, he is a pretty good eater now. He used to be very fussy when he was about 1.5 - 2 years old, but I think that as I have relaxed about food, so has he.
From D Clayden 17th April 2015
My boys are 11 and 12 and despite always having cooked one meal for all the family, they are both fussy eaters. I put this down to two things mainly. Firstly we live in an age of affluence. Unlike in previous generations, wherever you go with children they are offered refreshments. So they rarely get really hungry. On the occasions when they haven't had a midmeal snack they are much more accepting of what I put in front of them and will eat much more. They are also aware of what else there is in the house to eat. As an older parent brought up in the sixties and seventies I have seen household wealth and opportunity increase exponentially and it has had a significant impact on children's behaviour. Compared to forty years ago most children in the UK nowadays would have been considered indulged or 'spoilt'then. We are all so focused on their needs now, so naturally they believe their 'needs' or 'wants' to be important. This wasn't the case before - we just knew the choices weren't there. You were brought up, rightly or wrongly, to think you couldn't always have what you wanted in life - trained to do without - and you didn't have a kitchen full of other alternatives so you knew you had to take what was on offer.

Secondly there are sensory processing issues at play here. Who else remembers thinking mushrooms felt and looked like slugs? I went through a period from 9-11 of hardly eating a thing because most tastes made me feel sick. (I was, and still am, very small, btw). My younger son has Aspergers, and therefore has sensory issues too. Tastes, textures and smells will be much more amplified, and if deemed unpleasant, difficult to accept. Conversely, some sensory input is too 'weak' and can't be tolerated for this reason. My older son, I now realise, although he doesn't have ASD, is also affected to a lesser degree. In both cases there is neurological wiring that makes the boys extremely intransigent and difficult to negotiate with. It also means that one wants to cover everything with vinegar while the other would be happy eating brie and cranberry wraps for breakfast, dinner and tea.

My older son also had terrible feeding problems as a baby (induced at 36 weeks, reflux etc), which we think means he associates eating with discomfort. He still eat tiny amounts and would happily skip meals.

I am envious of the Spanish/French lady who has such a handle on her boys' eating. I expect some of this has to do with my first point - congratulations to her for managing to stay firm despite all the signals from modern culture about choice. But if you're having problems as a parent don't beat yourself up. Not everything is within your control, and there may be other factors at play. Just do your best, and relax. And I'll try to take that advice myself!
From Rachel 17th April 2015
Hi there. Lovely to read this I feel that we are I the same situation. This actually really cheered me up and is the approach that I take. Putting any pressure just does not work with some children. As a child I ate everything so I've found my children's attitude difficult to understand but apparently my husband was fussy as hell.
People continually have given me irritating advice-basically involving bollocking my children and punishing them for not eating and mostly I have managed to resist. On the rare occasion I have given it out if pressure it has ended disastrously! Not feeding them if they won't eat my meal has actually want my four year old doesn't eat for a few days - he really is that strong willed -!
I firmly believe , just like adults, some children are more into food than others and therefore some can be cajoled into eating. Living in hope that as mine get older they will slowly evolve with their eating and every so often my eldest takes steps. But always when I don't really notice as I'm really relaxed. Really hoping that my 'long ball' approach pays off - this parenting malarkey is hard but boy do I love them x
From SL Osborne 16th April 2015
I will certainly read his book to find out more. My daughter, age 6, has been a selective eater since the beginning. I have read a lot, despaired and coaxed and tried to force myself to chill out. Portion size is sometimes an issue but is not the crux - for her trying new things is the hardest task and having a varied diet that includes fruit and vegetables is a bit of a struggle.

Where do I want us to be? Well, all eating the same meals and enjoying family mealtimes seems like a loft goal but I hope we'll get there. I am trying to take the stress out of things - some of which I am sure I have caused - and talk to her honestly about why her body/taste buds don't like or want to try new things. Distancing us from the issue and talking in slightly (faux!) scientific terms seems to have helped a bit - we'll see!

I have tried a number of strategies - not all are effective. For her the 'they'll eat if they are hungry" approach has been a particular disaster - leading to tears and hunger and bedtime and the exacerbation of stress not the reduction. I am keen to hear what experts say on these issues and have a wealth of help but also think that you have to listen to and know your child and figure out what works to help them.

Today she tried a children's chicken korma and ate a re tiny bites - it was not a big meal by any stretch but she made a yummy face when tasting the korma sauce. Fingers crossed we can help each other down the road to happy mealtimes.

Thanks for the link to the article - yea resources.
From Ysabel Cardiff 16th April 2015
Hi !
I am half Spanish half French and I love cooking Japanese, Indian, Thai, French and Spanish food . My two boys are 5 and 7 . I Cook 1 meal For adults and Kids ( more chillies for adults if anything )!
If they look at their plate and go " I don't like this" before even trying, I say , ok , go And brush your teeth and go to bed .
Believe me , EVERY TIME, they stayed on, tried The food and liked it . You just have to pretend it DOESN'T bother You .
Mine are Now taken ANYWHERE and eat what ever is presented in front Of them . I am not a doctor in science , but a doctor in languages ! Which makes me think it has to do with common sense not what A+B = C - D x E .
Only 2 ordinary boys who are given directions and follow them .