How hard should you push your child? 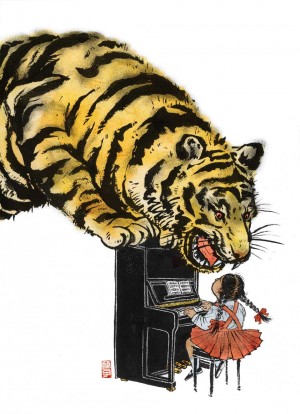 There's a question I keep asking myself at the moment.

“Am I pushing my seven year old too hard?”

It’s something I know my other mum friends and I talk about when we are together.

So, it was interesting to read this article in The Guardian this week by Tanith Carey.

My son, Tom, has just started in Year 2. He’s having violin lessons and I’ve enrolled him for Kumon (he has to do some maths worksheets every day), swimming and obviously Perform! He has school homework once a week and a spelling test every Friday. So, his week is pretty full when you also factor in play-dates and parties. But he does moan about having so much to do and he’s constantly telling me that it’s not fair.

Now the problem is that I alternate my thinking between "he needs to be pushed so he goes on to achieve his full potential " and "he's only seven - he needs time to just be and develop at his own speed. "

The Tiger Mother in me says that now is the time to seize the moment. You have to work hard at things and push your child in order for them to succeed and we all want to give children lots of opportunities in life.  After all, Victorian children would be going down the mines or working in a factory 12 hours a day. I am also reminded about the famous Barack Obama story. His mum would get him up at 4.30am every morning to give him extra tuition and when he complained she said “This is no picnic for me either, buster”.

If you call yourself "middle-class", you probably live in an environment where most people seem to be pushing their children. If you do nothing, are your children being left behind? But there’s also a nagging doubt in my mind that all this extra stuff will wear him out and make him resent it later on. Pushing him might stop him gravitating towards hobbies and enthusiasms by himself.

I was dreadful at Maths when I was young and I only got extra tuition at GCSE level. Had my parents provided me with extra help at the age of 7, that could have helped me be better earlier on. However, because I was pretty bad at most academic subjects, I threw myself wholeheartedly in the direction of the performing arts as that was the only thing I excelled at and that enthusiasm came entirely from me. Looking at my life now, I'm glad it worked out like that.

It’s such a hard one. I have no idea what’s best to do although I feel, deep down, that the answer is to create a balance. Children should have time to play and be bored, as well as being exposed to more formalised activities.

I’d LOVE to hear your thoughts.