Why I hate the word Mumpreneur 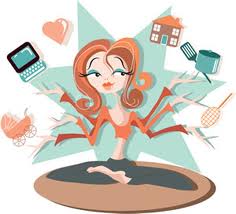 If you haven't heard it before, it simply means a Mum who is also...(you guessed it)... an entrepreneur. And, as a Mum who is an entrepreneur myself, you may wonder why I hate it so much.After all, what's to dislike? Isn't the word celebrating women who "have it all" - children and a business they have built up themselves? Women who juggle their commitments so well, they can do the seemingly impossible - be a commercial success on their own terms without sacrificing the family role.From my point of view, I see myself as a Mum and an entrepreneur but I don't really see how they are connected. In fact, I started my business 8 years before I had my first child, so to suddenly call myself a Mumpreneur (as someone described me recently) feels wrong and a bit silly. But many such women do choose to use the word to describe themselves.

I decided to use my best friend, Professor Google, to see what other people think of the word and it does seem that the camp is very divided.

I particularly liked this piece in Parent Dish but I'm not convinced it summarises my precise feelings.

Ultimately, the reason that I actually feel so negatively about the term is because I think that it implies that women should feel apologetic about being hard-nosed entrepreneurs. As if, because they put Mum on the start of the word then it means that they are working it in with their main job as a mother. Rather than their business being a major part of their identity and life, it sounds like they aren't really 100% serious about it...because, well, they are a Mum, after all.

The irony is that I don't believe that those working mums who describe themselves as Mumpreneurs actually feel like that but they still embrace the term in a way that women in other equally demanding professions don't.

For example, I've never heard a female doctor with children described as a Mumdoctor, or a banker as a Mumbanker, or a teacher as a Mumteacher?

Equally, can you imagine describing a male business owner with children as a Dadpreneur? It's entirely meaningless.

And this, I think, is the main point. Until we stop suggesting that women in business are just playing at it or working it around their more important concerns like their families, the fight against everyday sexism won't be over.

In a way, this just one more strand of the working mother debate. After all, even in 2013 and living in Central London, I still get judged for having children and a job. Maybe the term is simply a ham-fisted attempt to find a word expressing a female role that gives equal weight to both commitments. I'm not convinced. I think it's more likely that a lazy piece of journalese has been adopted by the mainstream media who give no thought to the effect this has on reinforcing sexist stereotypes.

Or am I just over-sensitive? I would love to hear your thoughts on this. Is Mumpreneur negative or positive?

From Lucy Quick 4th December 2013
Hi Alex, it's a very valid point you make and thank you for the feedback.
From Alex Lyons 3rd December 2013
I think the word mumpreneur came about when, unlike you, women began to set up businesses after they became mums. They decided that rather than working for an employer, they would rather work for themselves and still be able to fulfill their duties at home. As a result they became MORE succesful than they would have done had they remained someone else's employee. I fall into this category. I would never have started my business had I not become a mother - I would have been too scared to give up my normal job. Now I only work three mornings a week so I can still be with my children and am earning more money than I did before! Becoming a mother has freed me up to do what I really wanted to do... and that's why I the word is relevant.
020 7255 9120