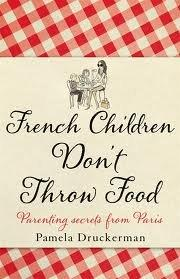 I’m always a bit sceptical about reading this type of book but I have to say that it has completely hooked me and I am now trying to bring out my own ‘french mummy’ with my kids.

Pamela Druckman moves from New York to Paris to be with her English boyfriend who is working there. They marry, have a child and immerse themselves in Parisian family life. But, after being a mother for a while, she starts to compare her own American/British techniques with the French mums around her and wonders why, amongst many other things, “French children don’t throw food”.

And it's not just mealtime behaviour, there are other differences as well. For example, French babies normally sleep through the night from 3 months. This isn’t because the mums are devoted Baby Whisperers or Gina Ford Evangelists. It’s all about what Pamela calls “The Pause” which means that, if your newborn cries at night, leave them 5-10 minutes before picking them up. Often they’ll re-settle themselves as they’ll just be going into a new sleep cycle, so nursing them or changing their nappy would be useless anyway. But no French book or parent will tell you this! Unlike the complex rules of appellation controllee, for French people it is just so basic and obvious that they presume everyone does it.

Pamela’s children start by attending a creche which is a state run day nursery that most children attend from an early age. So far, so normal. However, things start to get a little more groundbreaking when you check out the menu. Four courses, including a cold vegetable starter, a main course with a side of grains or cooked vegetables, a different cheese each day and a pudding with fresh fruit or fruit puree. So, a normal day’s menu could be tomato salad in vinaigrette, a side dish of peas carrots and onions in a tomato sauce with a white fish, some blue cheese with a piece of baguette and a whole sliced apple. No wonder she calls it a “dining experience” rather than a school lunch.

The main message of the book  is that French parents have a “cadre”, which is a firm framework surrounding a lot of freedom. The “cadre” idea is something that resonates with me and every Perform teacher will recognise it as the underlying structure of every Perform class. In essence, you teach the children the most important and essential rules that are vital for their safety and social development then let them be free within them. In the words of Pamela,  “Being strict about a few key things makes parents seem more reasonable and companionable, and thus makes it more likely that children will obey”.

It’s a fantastic book which has inspired me as a mother. If you haven't read it, I urge you all to get a copy. If you have, please do tell me your thoughts.

From Lucy Quick 22nd February 2012
That's great to hear, yes, it makes sense doesn't it.
From Alexander Residence 21st February 2012
'cadre' I love this concept. I was trying to explain something similar in a post last week where I argued we have too many rules for small children these days. I have a word for my ideal approach now, thank you!
020 7255 9120