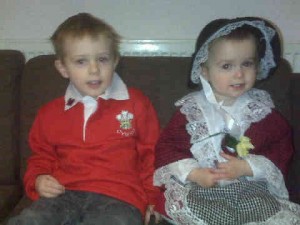 1st March is St David's Day and I'm Welsh, so it's obviously an important day for me!

And here are my little lovelies appropriately dressed for the occasion - getting them to sit still for 2 seconds to get that picture was a challenge!

On St David's day when I was growing up, we all had a half day at school, which was amazing. So for me March the 1st has always been a fun day and is still even now.

Dydd G?yl Dewi Sant (St David's Day) is the feast day of the patron saint of Wales, and 1st March was chosen as that was the day of his death in 589. Unfortunately, little is known about him for certain. What little information we have is based on an account of his life written by Rhigyfarch.

According to Rhigyfarch, Dewi's mother was called Non, and his father, Sant, was the son of Ceredig, King of Ceredigion. After being educated in Cardiganshire, he went on pilgrimage through South Wales and the West of England, where it is said that he founded religious centres such as Glastonbury and Croyland.

He eventually settled at Glyn Rhosyn (St David's), in South-West Wales, where he established a religious community.

Perhaps the most well-known story regarding Dewi's life is said to have taken place at the Synod of Llanddewi Brefi. They were to decide whether Dewi was to be Archbishop. A great crowd gathered at the synod, and when Dewi stood up to speak, one of the congregation shouted, 'We won't be able to see or hear him'. At that instant the ground rose till everyone could see and hear Dewi. Unsurprisingly, it was decided that Dewi would indeed be the Archbishop.

From the 12th century onwards, Dewi's fame spread throughout South Wales and as far as Ireland and Brittany. St David's Cathedral became a popular centre of pilgrimage, particularly after Dewi was officially recognised as a Catholic saint in 1120.

Growing up, St David's Day was a massive celebration. We all had to dress up in Welsh costume for school - the girls would wear daffodils and the boys would wear leeks.

Now, I celebrate by getting my friends to come over for a St David's Day supper where we have traditional Welsh delicacies such as cawl, lamb and Welsh cakes. Particularly as I now live in England it is nice to have one day a year when I remember my heritage. And of course I get to do what the Welsh do best - eat, drink and sing! Iechyd Da!

Thanks so much for your lovely comment - looking forward to meeting you too!

Cawl is a sort of soup or stew - it's awesome - see http://www.welshholidaycottages.com/food/welsh-cawl.htm

Lucy
x
From Daryl Sherman 1st March 2011
I'm so touched to read about this connection to your rich lovely heritage. The story of the ground rising so the crowd could see/hear Dewi makes me realize all the more why I've come to love Welsh folks. Just last year after an unfortunate glitch had cancelled my performance at Taliesin, a group of determined music lovers -including your mom and especially my very own 'Saint David' as in David Griffiths made the ground rise by concocting a way I could come to Swansea anyway and sing (literally) for my supper. So eat, drink, sing and enjoy this day. It's certainly what I love to do best. (Maybe I have a wee bit Welsh in me somewhere). Looking forward to meeting you all.
Warmest regards from chilly Manhattan,
Daryl Sherman
P.S. What is cawl?
020 7255 9120