A Little Love for our Libraries 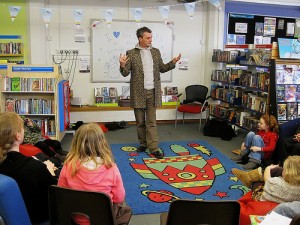 I was an extremely lucky child - not in terms of material goods - but definitely in terms of love and attention. I remember clearly that mine was a house where there was always someone willing to sit and read to me. So much so, that way before I could actually read, I did a frighteningly good impression of being able to. Basically, I'd been read to so often that I had memorised most of the books in my possession. It was something of a party trick.

When my parents had friends round, I would be called upon to show off my reading. I would sit in the living room with my favourite book apparently reading aloud -I had the books so well memorised that I even knew when to turn the pages - much to the astonishment of my parents' guests.

But once I'd learned to read for real, there was no stopping me.

It won't surprise you that I loved the library. After each weekly trip to the library, I didn't read so much as devour the books I'd borrowed. I think I also harboured a secret desire to be able to say that I'd read all of the books in the children's section of the library.

Despite not quite achieving this, I do remember taking part in a 'readathon' one Summer - I guess I was 10 or 11. The basic premise was to read as many books as you could over a two week period in the Summer holidays and get sponsored on a per book basis. I pity my poor sponsors - I don't think any of them expected me to read more than 20 books. But I did, and I loved every second of it. Where did I get those books from? The library.

So the proposed closure of our libraries - some 400 to 800 apparently - both saddens and sickens me. A library is about so much more than just books - and I say this as someone who really loves books. Closing a library isn't progress, it's a step backwards.

Many others feel the same. This film is an independent project in support of the Friends of Somerset's Libraries - a coalition of library campaigners in the West of England with media support from the Friends of Glastonbury Library & the Friends of Shepton Mallet Library:

Catherine McNally - a librarian, wrote an excellent piece on the Guardian website - Ebooks and their ilk are no replacement for libraries - highlighting just how much libraries offer communities.

Children's book borrowing continues to increase year on year - almost 80% of children use our libraries. I'd really like them to be around for future generations too. With university education increasingly expensive, it's my belief that we need libraries more than ever before.

Thanks for your comment - it really is very sad isn't it? Hopefully some will be saved.

Lucy x
From Mummy Zen 27th February 2011
Lovely reading your childhood memories of books and reading. I too have fond memories of enjoying books with my parents and a love for reading starting from a young age. I totally agree with you about the closure of libraries being sad and I think they continue to be a pivotal point in a local community. Ours is very well-used and luckily isn't one that's due to close down but I know of others fairly nearby that we will lose.
020 7255 9120