Out of the Mouths of Babes... 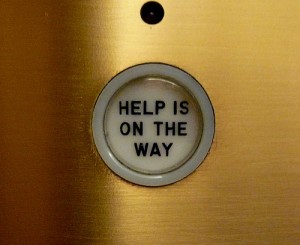 Yesterday, I was wrestling - completely unsuccessfully I might add - with some work (and quite probably huffing and puffing like the big bad wolf). My son wandered over to me and asked what I was doing.

"I'm just trying to get this work done, but I'm finding it very difficult" I said.

He looked at me thoughtfully for a moment, then said "You should ask for help."

I smiled and said something like "Maybe I should" (but not for one minute intending to) then went back to struggling.

I was relaying the story to my husband later on - expecting him to giggle along with me - I mean it's a lovely suggestion, but I'm not at school any more - it's not as if I can just raise my hand and have the teacher come along and help me!

I was therefore a little surprised when my husband said he thought that asking for help wasn't a bad idea at all, and in fact that's exactly what I should do. As my husband pointed out - it's really not such a silly idea at all. It seems my little boy is wise way beyond his years (I'd love to say he gets that from me, but as this post demonstrates - that's pretty unlikely).

So, it's settled then. I should ask for help. The only problem is I'm not very good at that.

More often than not, I'll elect to struggle on through. Even though, when I actually stop and think about it, there are lots of people that I'm sure would be more than willing to help me out so it's not like I haven't got people to turn to. I think perhaps I worry that I'll be putting people out but then again I certainly don't think badly of people who ask me for help.

In fact, I'll feel really bad if I find out at a later date that someone needed my help with something; but for whatever reason decided that they didn't want to bother me with it - so struggled through it on their own. That makes me feel horrible! And yet, it seems that I'm perfectly willing to put my friends, family and colleagues in precisely that position - and all because I've some issue with asking for help!

When I stop and think about it like that, I feel very silly indeed. As such, I plan on biting the bullet and from now on asking for help when I need it. It's amazing what your children can teach you, eh?

Glad I'm not the only one who finds it difficult to ask for help(!) - but you're right it is definitely the way forward :)

Thanks for taking the time to comment x
From Mummy Zen 6th July 2010
As adults, sometimes asking for help makes us feel defeated or incapable. Really it's an effective way to benefit from other people's ideas and input to enable us to achieve something. In my experience it's not always easy to ask for help but you definitely feel glad you did afterwards.
020 7255 9120