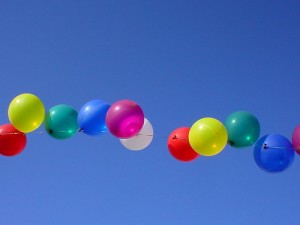 A little over ten years ago, the very first Perform school opened its doors.

Prior to starting Perform I was working as a musical theatre actress and, like most jobbing actors, while I loved my time on stage, my life in between was inevitably peppered with rounds of hideous temping jobs which I hated.

However, there was a light at the end of the proverbial tunnel. I knew I was happiest when working in the arts and so took a job teaching a children's drama class. I'd love to be able to tell you that my eureka moment happened there and then in my very first class but, sadly, the reality was somewhat different.

I was taken on without so much as an audition and, having been breezily introduced to the children, I was just left to my own devices. I was terrified.

There was no formal training given - it was very much a case of sink or swim... and for a while, I really felt I was sinking. But after a few weeks, things began to change. I can't pinpoint the precise point, but somewhere along the line I really began to enjoy it.

Fast forward a few months and I began to wonder if this was something I could really do... It was making me happier than my acting jobs. But, after a while, I wasn't really satisfied working for someone else. I'd started developing techniques that I wanted to share with a wider audience and I was frustrated. I began to think about striking out on my own.

While I can confidently say I've no regrets, building and running my own business has taught me a lot. Others who are thinking of starting their own businesses often ask me for tips, so ten years on, I thought I'd share ten tips with you:

1. Find something you're really passionate about

I don't necessarily mean you need a 140 page business plan - but you certainly do need to have a vision of what you want to achieve - short, medium and long-term - and a structured idea of how you're going to get there.

You know what? There will always be 101 really good reasons why you shouldn't start your business right now. My advice? Do it anyway. If you're committed and willing to work hard, you'll be amazed at what you can overcome... If you sit around waiting for that 'perfect' time, you'll probably never bite the bullet.

In some respects, I was lucky - I didn't have that much to give up - no high powered job with a fantastic salary and wonderful benefits - but it was still important to ensure that I couldn't just throw in the towel if the going got tough. I borrowed a fairly modest amount to get me started and it was those loan repayments which forced me to make it work.

Sometimes pressure is good, if you really *have* to make it work... the chances are you will.

Break those enormous, seemingly insurmountable tasks into smaller more manageable ones - everything will seem less daunting; and you'll have a fighting chance of getting something done. Likewise, aim for continuous improvement - building a business is often a gradual process. You'll never have the resources to do everything you'd like to do right away - even when you're established. Break it down and bit by bit make incremental improvements.

6. Recognise that in order to grow your business, you'll have to relinquish control

This was absolutely, positively the hardest thing for me. In the early days I ran two schools myself. This quickly grew to nine schools... and suddenly I was working seven days a week. In order to grow, I had to recruit and train more teachers . No matter what your business model, you are going to have to let other people contribute or you'll be limiting your potential. So, if you have to hire people...

7. Hire people who are better than you

Recognise your own strengths and weaknesses. You are not a superhero! There will always be some stuff which you're just not great at. Hire fabulous people who are good at that stuff. Hire people who will challenge you and take your business forward. There's no room in a vibrant business for 'yes' men and women... They may make you feel more comfortable, but they aren't going to help you long-term.

8. Learn from your mistakes

When we first started out we spent a lot of money on local press advertising which didn't work at all and we've had plenty of other disasters in our time. Be flexible enough to recognise what is and isn't working and adjust your plans accordingly. Be open to exploring different routes to market.

9. Remember that all important work/life balance

Much as I love my work, I probably lost the work/life balance for a while. Remember that whilst your business is important, it's not the *only* thing. Make time for your family, friends and of course yourself.

10. Take time to celebrate your successes

Don't lose sight of what you've already achieved. Successes deserve to be celebrated and the people who helped you get there should also be rewarded. At the end the day, building a business is all about creating a motivated team with the same objectives. And there's no greater motivator than success. Good luck!

Thanks for your lovely comment - here's to getting stuck in! :)
From Mummy Zen 17th March 2010
Great list of tips. I think 1 and 3 are very important. It needs to be something you love otherwise when the going gets tough, you don't have the enthusiasm to keep you going. Your point about just doing it is a good one. It's easy to want everything to be perfect before you launch a business or whatever, but like you say, if you keep waiting for that perfect moment, you'll miss out completely. Far better to get stuck in!
From Lucy Quick 17th March 2010
Hi Natalie,

6 was definitely the toughest for me - I'm a bit of a control-freak (but I'm working on it!) - as you said though, it really is liberating and so important.

Thanks for the congratulations too - I still have to pinch myself when I think about how far we've come!
From Natalie 17th March 2010
Number 6 and 7 are the big lessons I've learned - it's freeing to let go so that others can get involved and I can focus. I accept that I can't and don't want to do it all. Great tips and congrats on 10 years.
From Mums The Blog » Blog Archive » March Business Mums Blog Carnival 15th March 2010
[...] Quick, Principal of Perform, started up her first drama school 10 years ago and in her post 10 Tips, Ten Years On she shares the wisdom that 10 years experience in [...]
020 7255 9120