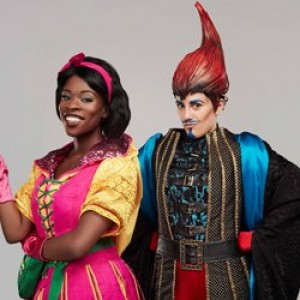 The count down to Christmas is on and what does that mean? Pantomimes!

Going to a pantomime is often a child’s first exposure to the theatre and is something I do every year with my children. It’s also an exciting time for many of our teachers as they take to stages across the country. As I’ve written before*, all of our fabulous teachers are professionally trained actors and I’m very proud to work with such a talented team. In order to work at Perform, they have to be immensely talented and fantastic with children so it’s no wonder they get snapped up at Christmas!

The festive season is always the busiest in the industry with hundreds of pantomimes and Christmas shows performed across the United Kingdom. From touring community shows to Christmas Cabaret gigs and huge full-scale productions, our teachers are often there. So, I thought I’d highlight a few of the shows they’re in - perhaps you’ll see one of them!

You may have spotted Tom Capper (Tea Under the Sea)  and Rachel Lea (Ya Ta Hey, Dolly Dolphin) performing in some of our Perform videos and this year you can catch them both at the Princes Hall in Aldershot performing in Beauty and the Beast. Or Sophie Ladds (who is our Killa Queen, Lady Lollipop, Ringmaster, Trixie in The Dream and many more) is a stalwart of the Towngate Theatre and has returned to Basildon as the Wicked Queen in their production of Snow White.

Robert Lindsay (who I worked with in Oliver! at the London Palladium many moons ago)  is taking on the villainous role of Captain Hook in Richmond’s Peter Pan this year. You'll also get to see our wonderful teacher, Ben Towney, as part of the ensemble in this fantastic family-friendly production.

Slightly further afield, Samantha Palin is returning to the Theatre Royal Wakefield this year as Cinderella’s Fairy Godmother and Naomi Gisbey will be playing the title role of Snow White at the Mansfield Palace Theatre. Rachael Stratton will be back at the Shanklin Theatre on the Isle of Wight for the third year, as Fairy Canary in Sleeping Beauty.

If you’re looking for a show in London, Time Out round up the best pantomimes in the city here so take your pick and you might even spot a Perform teacher or two! If you do, we’d love to hear about it.