Are you confident when speaking in public? 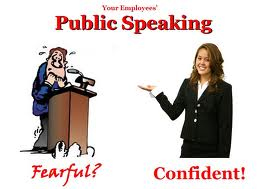 Because of my background as an actress, I've always mixed with people who are pretty confident speaking on their own in front of large groups of people. It wasn't until I started Perform and attended courses in Child Protection, First Aid and various other childcare-related subjects that I realised how many people find speaking in front of others frankly terrifying.

Yes, I realised that not everyone was the all singing-all dancing type like most of my friends, but it was still a bit of a shock to me that there were clever and articulate adults out there who were frightened to speak out on their own. We'd go around the circle asking for contributions and it was amazing how quietly people spoke. I remember one course when an attendee actually left half way through the session because she found it too intimidating.

The trouble is that virtually all of us will have to stand up in front an audience and speak at some point in our lives. Whether it's representing a defendant, delivering a Best Man's Speech, making a point in a meeting or simply thanking everybody for coming, we can't avoid the fact that there will come a time when we will literally have to stand up and make ourselves heard.

But if you aren't naturally an extrovert and haven't had any public speaking experience or a drama training, it stands to reason why this might not come naturally to you. After all, speaking in public can be scary. Not only are you judged on what you say but also the way in which you say it. And we all know how the adrenalin from being nervous can make your voice and body react in unexpected ways - making matters even worse.

All of which explains why there are so many presentation skills companies who work with corporate employees specifically helping people learn the skill of speaking clearly and confidently in front of an audience. And it's true: public-speaking is just another skill that can be learned and improved with technique and practise. But, like most skills, public-speaking is much easier and quicker to learn when young.

I was the sort of child that was too frightened to put my hand up in the class. I knew the answer was right, but I was too scared to talk on my own in front of my friends. Luckily for me, my parents sent me to drama classes. These transformed me because drama is all about talking in front of people, so the continuous practise means that you gain the confidence to do it in other situations too.

And my experience is far from unusual. There are loads and loads of children out there who feel the same as I did. I know that because I hear it almost daily from parents who speak to me at Perform. Happily, I also hear about the positive results the classes are having. In fact, one of the nicest compliments I've received recently came the other week from a Perform Dad who runs a very successful presentation skills company. He said to me that, if every child went to Perform, his company would be redundant.

I'm not quite sure about that (!) but developing key communication skills was certainly one of the main reasons I set up Perform. I've always believed that solo speaking is one of the most valuable abilities you can possess and that, if you learn it at an early age, you have it forever. So, I wanted to create a class where, with a teacher's encouragement and help, children could come and learn to speak clearly and confidently in front of their peers. I also wanted to deliver an environment where children weren't put on the spot and could develop without feeling the competitive pressure inherent in the auditions and castings of many other drama and stage schools .

If you have a child that you think needs help in developing their speaking skills, this is a really good exercise to play with them at home. It's called ?The Detective Game? and I normally play it in the car with my own children. Its name comes from the fact that you learn different clues about your child every time you play it. This is how it works:

This is only one game of many you can play, but it is a really key one, and by playing it every week, you will see a real difference in how your child speaks.

Please have a go and let me know how you get on.