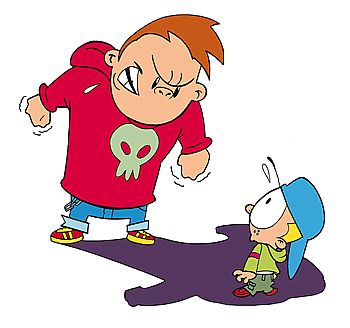 Bullying is a difficult subject to talk about - but it's very important that we don't shy away from it. A survey completed by the charity Bullying UK amongst 4,772 school children revealed that 69% of the respondents had been bullied, 85% said that they had seen someone else being bullied and 20% admitted to being bullies themselves.

In 1999 an anti-bullying policy was enforced in schools across Britain, but bullying is a tough nut to crack, so while schools are trying to prevent it, unfortunately it can still happen.

Bullying can happen to anyone, and anyone can be a bully.

There are lots of different forms of bullying including teasing, name-calling, violent behaviour, threatening behaviour, stealing a child's belongings, and ignoring or excluding a child from friendship groups.

It can take place virtually anywhere - in school, on the way to school, at after school clubs, and increasingly online.

Sadly it's likely that at some point in your child's life they will either be a victim of bullying, see someone else being bullied, or be a bully themselves. As such I think it's really important to talk about bullying, what it is and why it can cause so much distress.

Take a quiet moment and talk to them: ask them if they know what bullying is, and if they can give you some examples of what constitutes bullying. Make sure that they understand how horrible it is for the victim and how bad it makes them feel. Ask them if they know what to do if they are being bullied, or if they see someone else being bullied. Explain that they should tell someone, eg a teacher, you, someone else that they trust (brother, sister, Aunt, Nan, Grandad, etc).

Go on to ask if they've ever been bullied, or if they've seen anyone else being bullied.

If you do find out that your child is being bullied, be supportive and remain calm. As much as you might be tempted to go straight to the other child's parents and have it out with them it really is best to approach the issue sensitively. Arrange a time to go and speak to someone at your child's school - it's important to make them aware of the problem so that they can take appropriate steps to handle it and support your child. If the problem continues, try to keep a diary of the incidents, it will make the situation easier to handle if you are able to highlight specifically what has happened and when.

Conversely, you may find out that your child has been bullying others. Of course this will be a shock and your first reaction may be to deny it. However, it's far better to try to deal with the problem. If your child is accused of bullying speak to them about it. Find out what is going on and why. Is your child also being bullied by someone else? Or are they doing it to try to become more popular?

Help your child to understand how their actions are affecting others. Encourage them to empathise with how the bullied child must be feeling. Ultimately they need to understand that bullying is totally unacceptable under any circumstance.

At Perform, we've created a special game to help children who felt like they were being bullied or forced to do something they didn't want to do. It's called Just say 'No'. Why not try it at home?