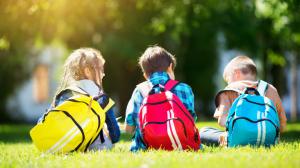 Mum of three, Georgina Fuller, contemplates the autumn term as she gets her brood back to school.

I've always liked this time of year as it's so reminiscent of fresh new starts and beginnings. While I love the lazy summer holiday mornings - not having to load three small, squawking people into a car with their accompanying bookbags, forms, PE kits, lunchboxes etc. - I'm always ready to hand them back to the teachers by September and get back to some semblance of routine.

This year will be the last my three (aged 10, 7 and 5) will all be at the same school before the eldest heads off to the dizzy heights of secondary school. I will then have to navigate two separate school runs (we live in a village, no strolls to school for us) but I'll cross that bridge when we come to it and enjoy the final year of shepherding all three back and forth along with all that this entails ("I want to sit in the front! It's my turn!").

I always try to embrace the lack of routine, early mornings and academic expectations as much as possible over the summer holidays. The only thing I really insist on is that they carry on reading. We go to the library to stock up on books - I've been trying to get the 10 year old to branch out a bit from his beloved football books but I do think that reading is reading, and as long as they read something - be it a Beano comic or a Harry Potter novel - and that they enjoy it, I don't worry too much.

I know that my eldest is already feeling apprehensive about the idea that he will be going to a different school from some of his friends next year. I've tried to reassure him that we will still see most of them at football club on Saturdays, plus I'll be arranging plenty of playdates with his school buddies in this final year. As he and his friends chat about which secondary schools they may or may not go to, us parents are avoiding the subject completely (tensions are starting to brew with some parents vehemently believing that this school or that school is best for their child... and mine!)

Change is good really, isn't it? Or so I try and tell myself.

Our younger two will also be facing new challenges this year. The 7 year old struggles with change and is hugely attached to his Year 2 teacher so I know it's initially going to be quite unsettling for him going into Year 3. He is also leaving the smaller playground and moving up to the main larger one so that will be, for him, somewhat daunting. And my 'baby' is going into Year 1, which I remember being quite a significant step up in terms of expectations. So it's all change for us but change is good really, isn't it? Or so I try and tell myself. Plenty of playdates in the early weeks is my mission to help them settle in, as, over the summer, it's often hard to see school friends due to clashing holiday plans. I know my three will be thrilled to see their friends on return to school, that's one dead cert (and I'll be shaken off at the school gate pretty swiftly, much to my pain!).

I will probably miss these primary school years.

From year to year, some things never change though. Spending a small fortune at Clarks, Smiggle and M&S. The hideous shoe-shopping trip x 3 (do they ever stock the sizes I need?); finding the 'right' pencil cases, the latest water bottles and of course the boring school uniform shop (or "school unicorn" as the 5 year old calls it) which they will probably lose or trash in the first few weeks of term.

I will probably miss these primary school years. The look on my daughter's face as she runs out of her classroom towards me, the jostling to sit in the front of the car and hearing what everyone had for lunch. Plus the regular communication from school which dies in a ditch once they get to secondary school (and having no idea who their friends are, let alone the parents!).

Children are better than us at dealing with change and often forget that anything changed at all.

Children are often much braver than us parents think and we can underestimate their resilience. They are better than us at dealing with change and often, once they get stuck into something new, they forget that anything changed at all! Once term starts, I know that together we'll conquer the new teachers/new classrooms/bigger playgrounds. We'll get through the ups and downs of school dinners vs. packed lunches ("sandwiches are so boring") and get over the lost water bottles and favourite football boots. And, just when we think we've mastered the new routine, it's July... more changes and readjustments just around the corner. Bring on the autumn term- change is good!