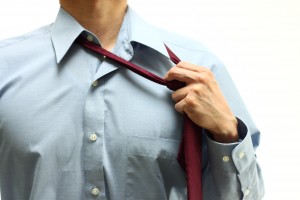 Tim Lott muses the impact of our children challenging convention, and wonders if it’s time to stop wearing a tie.

For some reason I can no longer remember – I was probably trying to be funny, always a mistake – I started doing a fake Russian accent in front of my eleven-year-old daughter on the way home from school. I was entirely taken aback when she rounded on me furiously and accused me in no uncertain terms of being ‘a racist’.

Leaving aside for the moment the fact that self-righteousness seems to have become a plague even among pre-teens, my first reaction was to laugh, which made her even angrier. Faced with such fury, my second reaction was more unsettling. Could she possibly be right?

I always like to assume that my children are wrong as a matter of course – it makes life so much easier – but annoyingly in this case it occurred to me she might have had a point. Or rather, she may have had a logical presupposition on her side which was difficult to easily argue with. If it was racist to adopt, say, a Pakistani or a Chinese accent, why wasn’t it racist to do a Russian one?

The point is, children often ask difficult questions which give you the uncomfortable feeling that quite a lot of your thought and behaviour is a matter of habit or custom rather than actual logic.

...children often ask difficult questions which give you the uncomfortable feeling that quite a lot of your thought and behaviour is a matter of habit...

To take another example, another one of my daughters (I have four) once asked me why she couldn’t have cake for breakfast. I responded with bluster, mainly because I couldn’t work out the answer. After all, muffins, Danish pastries and sugary cereals are all essentially cakes. Why not scones with jam and cream or chocolate gateau? For that matter, since we are on the subject of sweet things, why does dessert always come after the main meal and not before? Who wrote the rulebook?

My own parents had an effective rejoinder to this – ‘because I say so!’ This was obviously a cover for the fact that they didn’t have a good answer. However, this response no longer seems to cut much ice.

A similar dilemma arises when my daughter asks why she should have to tidy up her room when, well, it’s HER room, right? Once more, I find myself stumped to find a sufficiently convincing response. For that matter, why should she have to wait until she is 11 before having ear studs? Why not ten, or nine? Why can’t she cut all her hair off if she feels like it? I’m not sure. She just can’t.

Why are rude words rude? After all, they are only sounds coming out of a mouth.

Having children teaches you quite quickly how trapped by convention we actually are, and how unexamined so many of our thoughts and behaviours tend to be – which is disconcerting. That’s why children’s straightforward simplicity of mind is so very annoying.

Why are rude words rude? After all, they are only sounds coming out of a mouth. And why can parents use them and not children? Why, in some households, is it de rigeur to say ‘loo’, and absolute taboo to say ‘toilet’. Again, it’s far from clear.

Frankly, my children make me think more than I care to. Before I know it, I shall start to ask myself why I tie a length of patterned cloth around my neck when I am attending a formal occasion, or why one sends Christmas cards to people one may not care for or even like.

Eventually my children will grow up and learn to stop questioning all the stupid things we do, and just go along with it like everyone else, or talk about the weather we’ve been having. They will lose their innocent simplicity and become corrupted adults riddled with irrational assumptions.

Before I know it, I shall start to ask myself why I tie a length of patterned cloth around my neck when I am attending a formal occasion...

It’s a terrible shame I suppose. But I, for one, just can’t wait for them to get as dumb as everyone else. It makes life so much easier. And I’ll be able to continue working on my Russian accent. Which, whatever my daughter says, is hilarious.