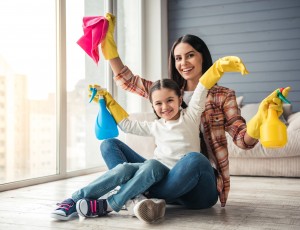 Mum of two, Jo Wiltshire, bounces into spring with her sleeves rolled up, ready to combat the kid clutter and tidy the toy tat.

‘Spring is sprung, the grass is ris’... so went an old rhyme my mother used to say at this time of year. The second line went: ‘I wonder where them birdies is?’ – but in my house, I’m adapting that to ‘I wonder where my carpet is?’

Specifically, the carpet in my son’s room. All that can usually be seen of it is a small ‘landing strip’ that cuts from door to bed, enabling him to navigate a sea of ‘boy stuff’ that has spread across the floor like a heaving, malevolent landfill site.

Time for that dreaded task: the Spring Clean. A tentative poke around reveals a soup of Nerf bullets, stones and sticks and other outside treasures, Lego droppings (of course), enough Star Wars paraphernalia to help Disney out with the set of the next film, the odd sock and rather a lot of plastic ‘tat’, the origin of which I am at a loss to explain.

Surely we haven’t fed him Happy Meals for the past 365 days? Can he have been to that many birthdays with little plastic offerings from China or Taiwan in the obligatory party bag?

No, I can only conclude that it simply materialises in the night, attracted to small boys in the way a black hole sucks in passing space rocks. It’s not just boys. My daughter, now 14, suffered a similar condition when she was younger, although with rather more hairbands thrown in. Her room is now so minimalist it resembles a monk’s bedchamber.

A tentative poke around reveals a soup of Nerf bullets, stones and sticks and other outside treasures...

Some children evolve from the swamps that are their bedrooms. But some don’t. Or won’t for a while. And if you are harbouring such a child in your house, what can be done?

Well firstly, be a role model. You area role model, right? Your kitchen cupboards are filled with regimented lines of tins and jars, your shelves artfully arranged, even your knicker drawer would do you proud should you have to send someone in there for emergency supplies..? Good. I didn’t doubt you for a moment.

If you do have the odd bit of decluttering to do though, do it together. A bit of parent/child pile-relegating bonding. This pile – keep. That pile – charity. The other pile – rubbish.

This can have a tendency to descend into something like that magic trick where the magician swaps the ball from under three cups. I know that broken toy was in the rubbish pile, but it seems miraculously to have joined the ‘keep’ pile by impressive sleight of hand..?

Sometimes things may get really combative – only a small child can so fiercely object to you getting rid of a toy they have not even looked at for three years whilst proclaiming indignantly ‘You can’t give away Womble! He’s...he’s...he’s FAMILY!’

If this happens, you will be forced to use the ‘let’s carefully store him in the loft where he will be safe forever and ever’ approach. The idea is that, after an undetermined stretch of time, poor Womble will fade entirely from memory and may then be safely dispatched to your chosen charity shop without fear of your child putting out a Missing Persons notice.

That, or he will stay in your loft until you are 75 and downsizing, and your by now middle-aged child can reclaim him in a gush of nostalgia. ‘Womble! Where have you been?My life has been barren without you...’

The final step is storage. Boxes, tubs, stacking units from the Mecca of children’s tat-related storage needs (the Swedish one) – whichever, as long as you stick to one rule: do not buy anything see-through.

Sometimes things may get really combative...’You can’t give away Womble! He’s...he’s...he’s FAMILY!’

All storage must be opaque. This will enable you to magic away any remaining rogue rubbish – by this stage mostly small plastic items that have fallen off something else ‘but are VERY important Mummy!’

‘Where is the Lego man with the tutu and machete, Mummy?’ ‘In the stylishly jaunty yet practical tat container, sweetheart! Enjoy!’ By now your child’s room will look roughly six times bigger and you will feel like Mary Poppins after the Spoonful of Sugar song.

Just beware, it won’t last long – remember wise old Aristotle and his ‘nature abhors a vacuum?’ (No, not a vacuum cleaner, although that applies too.)

There are already little plastic armies waiting somewhere out in the cosmos, ready to invade the room once more, because the laws of physics dictate that there is TOO MUCH SPACE in there. Be vigilant, and may the tat-fighting force be with you.