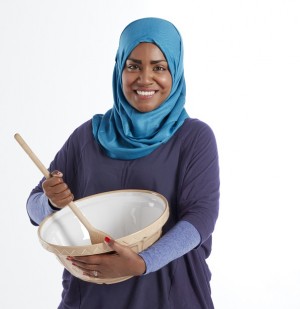 Popular 2016 The Great British Bake Off winner Nadiya Hussain chats to Shine about her childhood, family baking, and making THAT cake for the Queen.

What is your earliest food memory?

When my dad came home with a whole sheep butchered and said, let's see how much steak you guys can eat.

Growing up, were you a confident child?

Yes, I’d say I was confident. I’ve always known my own mind and chased my dreams. It’s important for children to do that and to be able to talk to the grown-ups around them about their ambitions.

Where did your love of baking come from?

I didn’t understand the concept of baking until I did Home Economics at school. My mum used to put her pans in the oven as storage so I didn’t realise what the oven was for! When my teacher put a chocolate cake in the oven I realised she didn’t have pans in there. Honestly, it was like sorcery to me – that magic has stayed with me.

What tips would you give to parents to get their children involved in the kitchen?

My biggest encouragement is don’t be worried about the mess! It can be cleared up! It’s trying things out in the kitchen and having fun.

Your book contains fairytale stories with a fun twist. What inspired the Gingerbread Guy?

I’ve put star anise in my gingerbread for years and I wanted to use the recipe in the book. I tested this one on my daughter because she’s a little more wary of flavour. At the end of the story the fox doesn’t eat the gingerbread guy, he runs away, because he doesn’t like the flavour of the star anise. Reading her the story made her want to try it! I thought that could work for somebody with a child who's a bit fussy like my daughter.

What did the Queen think of your birthday cake?

Baking the Queen’s 90th birthday cake was amazing. I was so anxious about the whole experience. When I told my daughter I was making a cake for the Queen, she said, ‘But you’ve made loads of cakes for Mary Berry!’ As far as we’re concerned, Mary is Queen in our house. It was an absolute honour to bake for the Queen and to be a part of history. I think she liked it!

Get the family together in the kitchen with Nadiya’s Bake Me a Story. Out now in hardback from Hodder Children’s Books.