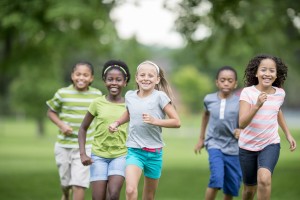 Getting your kids exercising might not be easy – but don’t panic, Jon Horsley provides lots of options.

We all want our kids to be fit, happy and healthy. But as anyone who has ever let a gym membership lapse in February knows, getting regular exercise is not as easy as popping down to the park for a jog every day.

And if it’s hard to motivate yourself to step into the lycra, then it could be even harder to get a child who doesn’t have a burning desire to run around playing football. In the olden days, it may have been possible to stick them in a PE kit, kick them out and not open the door until they’d completed a cross country run but it’s frowned upon nowadays – and with good reason. According to experts, being strict about it can work in completely the opposite direction.

‘We’re not living in the 19th century,’ says Yvonne Wake, a child fitness expert and lecturer in fitness and wellbeing. ‘There’s no need for your children to be into a specific sport and become a champion at it. There’s any number of physical things your kid can do, whether it’s cycling, walking or dancing. Kids love music. All young children do, so dancing can start very young. Aerobics or yoga, too. Why not?’

We live more sedentary lives than ever before in human history.

Yoga is an excellent example of exercise that kids not into competitive sport can enjoy. A few years ago it was thought that kids shouldn’t do yoga because their bodies weren’t developed. But studies have shown that it’s good for them too, so long as it’s not too extreme. In fact, celeb mums like Drew Barrymore and Gisele Búndchen have been pictured practising with their kids. And it’s just one of many options – some more wacky than others.

‘I remember a decade ago, there was outcry about someone teaching pole dancing to kids but it’s very good for core strength,’ says Wake. ‘And now it turns out that there are classes everywhere. Exercise is not just about sport, it’s about exerting yourself physically – so any type of movement counts. We live more sedentary lives than ever before in human history, so it is not just about winning sport, despite what schools seem to think.’

Schools are a key part of your child’s life and it can help to have a teacher onside. Just like that enforced cross country, the days of the best kids being in sports teams, while less able children loaf around should be consigned to the dustbin. Movement of any sort is proven to help learning and cognitive development, so schools should be pushed on it if they’re not providing adequate opportunities for all kids.

The days of the best kids being in sports teams while less able children loaf around should be consigned to the dustbin.

‘Some of them can be old-fashioned about it,’ says Wake. ‘Parents should be able to ensure that the whole class is involved in some form of exercise.’

Of course, as a parent you don’t get away scot free. Kids take most of their cues from their parents, even when they’ve reached an age where they pretend not to. Studies show that if they see you doing regular activity, they are much more likely to get involved themselves. ‘Do the activity with them,’ says Wake. ‘I know some people who have cycled a race from London to Brighton with their children. There are no limits...’