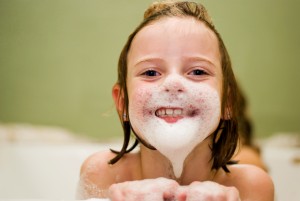 ‘Can you do bathtime?,’ asks my wife. It is 6.45pm, and I am just back from work. I know this is meant to be a parenting highlight, the apogee of fatherhood – time to bond with my youngest son as he frolicks in the bubbles. It is not. It is a chore and kickstarts what has now become a marathon: bedtime.

With four children between 14 and 5, the time between the bath tap being run for the youngest and lights out for the eldest stretches for eternity. Brexit negotiations would be swifter.

The trouble is not the two youngest. Once the tedium of bath is out of the way, at least I can have a lie down while I read them bedtime stories. And they are usually tucked up, if not asleep, by 8pm – though I am informed by the 9-year-old that this a curfew cruelty worthy of calling Childline.

No, the difficulty is with the two eldest, both at secondary school and who often have homework that stretches long into the evening, especially if they have returned late after some football match or swimming practice. They prefer to do it at the kitchen table, rather than their own bedroom, which means our evenings are interrupted with frequent questions about calcium carbonate (which I know nothing about), Martin Luther (with whom I’m slightly better acquainted) and Caecilius (which could be venereal disease or  a fictional Roman, I can never remember).

Once the tedium of bath is out of the way, at least I can have a lie down while I read them bedtime stories.

‘Why does a bottle of water change shape when it is frozen?’, says the 14-year-old.

His homework often stumps me, but even my paltry GCSE chemistry can answer this one. ‘It’s because water molecules expand when frozen,’ I reply.

‘Why does a bottle of water change shape when it is frozen?’ he repeats, as if I were totally and utterly invisible.

‘I was speaking to Siri,’ he says. I’ve tried, in the past, to persuade him to use a dictionary or encyclopaedia for his homework, but I might as well have been suggesting a wax tablet or abacus. Instead, he speaks into his phone, hoping the voice-recognition software will find the answer.

And, if truth be told, I sometimes want him to watch telly with us too. In this era of doublescreening and when children’s main form of entertainment is gleaned from YouTube clips, the idea of settling down and watching an old-fashioned drama en famille is rather appealing.

But many genuinely family-friendly shows, the sort that Siri-shouters want to watch with their parents after their homework, don’t start until 9pm.

The Apprentice is adored by both the 11 and 14-year-old who laugh like Beavis and Butthead at the imbeciles dished up for our entertainment. But it starts at 9pm. So too Downton, Victoria, The Halcyon or any other of those glossy Sunday night dramas.

I know that the iPlayer and other catch-up services mean you can watch these at any time, but only after they have finished their initial airing.

The whole point of ‘appointment-to-view’ telly, is that it is watched live by different generations – together on the sofa. Or are millions of 10 and 12-year-olds now regularly going to bed at 10pm? Maybe I am very old-fashioned about bedtimes, but anything after 9pm for a pre-teen seems, to me, too late.

If nothing else, when are parents meant to get some time together on their own?

Children aged three to five who regularly go to bed before 8pm were less likely to be obese as teenagers, according to a US academic study. The scientists found delaying a child’s bedtime until 9pm doubles their chances of becoming obese.

Just one in ten of the children with the earliest bedtimes were obese as teenagers, compared to 16 per cent of children who went to bed between 8 and 9pm.

A separate 2013 study in Britain, conducted by UCL found that children with erratic bedtimes are more likely to have behavioural problems – including hyperactivity, problems with peers and emotional difficulties – and demonstrate symptoms similar to jet lag.

If erratic bedtimes were not tackled, however, parents could expect their child’s behaviour to progressively deteriorate.