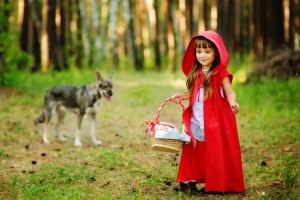 Fairy tales form a memorable part of many people’s childhoods but, although they are enjoyed primarily by children, the originals are often not so innocent.

We explore the original sinister and gory storylines of ten well-loved fairy tales. And we’ll be getting gory with our take on some traditional tales next term: Bluebeard’s Bride for 7–12s and our street dance interpretation of Snow White, Killa Queen, for 6–12s.

1. Beauty and the Beast
The popular tale of Belle being captured by and then falling in love with a beast has, over time, moved some way from the traditional tale. The original has no Gaston, no singing and dancing silverware and of course no Belle (she is simply called Beauty). The daughter of a king and a good fairy (and not a merchant’s daughter after all), the original story touches on the controversial subject of women having a choice about who they marry, at a time when their fathers would make this decision for them.

2. Cinderella
The uplifting story we know of Cinders, bullied by her ugly step-sisters but saved by her fairy godmother, is a sedate facsimile of the original. Whilst the ending is the same, the Brothers Grimm version sees the slippers made of squirrel fur and not of glass, with the step- sisters chopping off parts of their feet to try and make the slippers fit! Two pigeons witness their attempt at trickery, peck out their eyes and they end up living the rest of their lives as blind beggars.

3. The Frog Prince
The story we know, of a prince being turned into a frog by an evil spell, centres on the spell being broken by the kiss of a princess. The reality is that his transformation from frog back to prince was due to a spoilt princess throwing the frog against a wall in anger and disgust!

4. Hansel and Gretel
Despite the saccharine story we all know of a gingerbread house covered in sweeties, this was originally a terrifying tale of cannibalism and child abuse set in a dark forest. In an early portrayal, the wicked witch is in fact the devil. Thankfully, in all versions, there is a happy ending for the children.

5. Goldilocks and the Three Bears
The original tale of hungry Goldilocks creeping into the bears’ cottage while they are out for a walk is a less gentle story than the one we know. In one early version, the bears find Goldilocks, rip her apart and eat her! In another version, they find her sleeping but discover she is an old hag who jumps out of a window and breaks her neck when the bears wake her up.

6. Rapunzel
The popular story of the beautiful long-haired girl, locked in a tower and finding her saviour in a passing prince is a far cry from the original German tale. In that, the happy couple were only reunited after Rapunzel, pregnant and bewildered, was thrown out into the wilderness by the evil witch. In some versions, there is no happy ending, with Rapunzel abandoned by the prince who had no intention of marrying her.

7. Little Red Riding Hood
There have been many re-writings of this tale, many of them more gruesome than the one we know today. In one, the story is about a young lady, not a girl, who is given false directions to her grandmother’s house by the wolf and ends up being eaten before she even gets there. In another, the wolf eats both Red Riding Hood and her grandmother. The woodcutter, arriving to find a very well-fed wolf in bed, cuts open his stomach and lets them both out...alive!

8. Sleeping Beauty
The romantic tale of a spell being broken by true love’s kiss has seen many grisly iterations. In probably the most disturbing one, the princess is woken by a baby sucking her finger and finds that she is mother to twins, their father being the prince who’d attacked her while she slept. In another, the prince’s mother is an ogress who likes to eat children.

9. Snow White
A bleak tale indeed is the original version of Snow White, with the Queen demanding that her huntsman brings back Snow White’s lungs and liver on hearing that she is the fairest in the land. As if this wasn’t enough, the Queen asks for them to be served for dinner! Revenge is sweet, however, and, arriving at Snow White and the Prince’s wedding, the Queen is presented with a pair of red hot iron slippers and forced to dance to her death.

10. The Pied Piper
We all know the tale of the man dressed in a patchwork of colours who offers to rid a town of rats. He plays music on his pipe which draws the rats out of town, but when the villagers won’t pay he decides to rid the town of children too! In one particularly dark version, the piper leads the children to a river where they all drown.