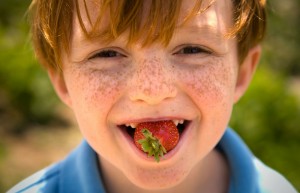 Thanks to numerous initiatives, we all know what our children should be eating. But what if yours simply refuses? Chitra Ramaswamy explores ways to achieve that all-important five a day.

It’s an issue most parents will be confronted with at some stage: how to get your child to eat more healthily. We all know the scenario... the lovingly home-cooked meal rejected in favour of chicken nuggets (again), the demand for pizza seven  nights a week, a refusal to eat anything green. Though we are all aware the secret to good health is a balanced and nutritious diet, the question remains... how on earth do we get children to eat their greens?

For many experts, a healthy attitude is the place to start. Mealtimes should be fun, inclusive, and stress-free. Sit down with your children, encourage and praise them and, ideally, eat with them. Research has shown that children who eat the same meals as their parents, as is the norm  in the rest of Europe, are more likely to have healthy diets. In essence, the golden rule about  not making food a battleground still stands. Never pressure your child to eat something they don’t want. Many studies show that children  who are pressured actually consume less fruit and vegetables. The idea is to encourage your child to love food and enjoy eating. So if they reject something, hide your frustration.

A healthy attitude is the place to start. Mealtimes should be fun, inclusive and stress-free.

What about bribery or, if you find it easier to stomach, reward systems? Does promising your child ice cream or even money if they finish their greens work? According to Tam Fry, spokesperson for the National Obesity Forum, cold hard cash might be the answer. In light of figures showing that one in ten British pupils are obese when they start primary school and only one in five children eat vegetables every day, Tam suggests putting small amounts of money into a bank account for a child in exchange for them eatingtheir veggies. But this is a controversial tactic and psychologists say that coercion of any kind, including insisting that  a child remains at the table until they’ve finished their meal, can have long-lasting negative effects on their relationship with food. In their view, talking about ‘good’ and ‘bad’ foods is, in itself, unhealthy. As psychotherapist Susie Orbach puts it, “we should just eat well when we are hungry.”

However, if you are starting to worry about your child’s diet, you could try the Tiny Tastes game, a method based on University College London research. Apparently, if children taste a new vegetable at least ten times, even the most reluctant will eat more of it. Launched in 2013, in partnership with Weight Concern, and supported by a host of food writers and health experts, the £5.99 Tiny Tastespack encourages parents to offer a piece of a chosen vegetable cut to the size of a child’s fingernail 10–15 days in a row and includes record charts, stickers, and colouring sheets. Find out more at weightconcern.org.uk/tinytastes

If children taste a new vegetable at least ten times, even the most reluctant will eat more of it.

Finally, try not to panic. The truth is many children, at some point, will go through a phase  of being fussy eaters. Though babies tend to start out as reasonably adventurous eaters, around the  age of 18 months to two years, ‘neophobia’ (fear of the new) sets in and many begin to reject a wide variety of foods. In a 2016 study of 120 children aged between three and eleven, 39% were identified as picky eaters at some point. Evolutionary psychologists believe neophobia presents because, when humans were cave-dwellers, it would  have prevented newly mobile babies from trying unfamiliar and potentially poisonous plants or berries. In other words, it’s perfectly normal, and it’s believed to decline around the age of six. So keep cooking, keep trying and... relax.

FIVE WAYS TO HELP YOUR CHILDREN EAT HEALTHILY
1. Don’t wait until your child is overly hungry to feed them.
2. Make sure your child is getting enough sleep and time outdoors to build an appetite and reduce the craving for a sugar rush.
3. Make food as tasty as possible: there is  a reason why children regard over-boiled  and unadorned sprouts with disdain.
4. Don’t overcrowd the plate: children’s stomachs are small and a large amount  of food can overwhelm them.
5. Don’t give up. There is evidence that repeated exposure to foods can build familiarity over time