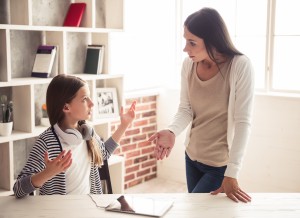 Tim Lott considers what responsibility really means and suggests we must learn not to be too hard on ourselves...or our kids.

I can’t help but wonder whether adults really understand the meaning of the term, since so many of them are reluctant to do so themselves. No surprise, because it isn’t simple.

There is a whole branch of law, Equity, that studies degrees of responsibility of any given event or action. That might seem an obscure principle in the everyday process of bringing up kids, but in fact it’s exactly relevant, and horribly inescapable.

To take any everyday occurrence. You hear a crash from the next room. You walk in and an expensive vase lies in pieces on the floor. You are furious. Your twelve year old stands over the fragments looking anxious.

What did you do?’ you demand in barely suppressed fury, knowing the answer in advance.

‘Nothing!’ responds 12 year old. ‘My torn coat pocket just brushed against it while I was walking past. It’s not my fault’.

The fact is, practically everything that happens, however trivial, has a tangle of causes which need to be teased apart.

You now remember you had promised to fix said coat pocket several weeks before, and that as a result of the disrepair, it has been sticking out from the rest of the coat like a semaphore flag.

‘You should have been more careful! You knew your pocket was hanging loose. It’s your fault! And anyway, you weren’t walking, you were running.’

‘But Mum! I was in a rush because you told me I had to finish my homework before I went out tonight. And the bus was late, so I’ve got less time than I planned for.’

‘You should have allowed for the bus being late! It’s always late. That’s no excuse!’

‘But Mum! What was the vase doing on that table anyway? It’s usually on the other table.’

She has a point. You moved it last week from the right hand table to the left.

'Don’t be ridiculous. It’s been there for weeks!’

It’s true. The child is always knocking things over by accident.

‘Don’t try and wriggle out of it. TAKE RESPONSIBILITY.’ You yell, frustrated now by the confusion in your own mind. ‘You’re paying for a new one and that’s that!’ Cue bitter tears by child, and feelings of self-reproach from parent. But whose responsibility is it really? Hard to say. The fact is, practically everything that happens, however trivial, has a tangle of causes which need to be teased apart. So apportioning responsibility is rarely easy. Which is unsettling, because when a child does something you disapprove of, you want to be sure of yourself – not only because you want to be fair, but because children need firm boundaries.

So how do you teach about responsibility? It’s crucial to understand that ‘responsibility’ is not so much a fixed event in the outside world, but something you ascribe, or allocate, within your head.

That doesn’t mean there are no benefits to taking responsibility. If you choose to take responsibility for something, then you are in a sense ‘owning’ it. The child might not see the long-term benefit in admitting the so-called responsibility in her knocking over of the vase. But getting into the habit of recognising your own role in an event – whatever precise percentage it might constitute – has a good long-term benefit for all involved. Because it acknowledges reality, and that’s a good habit to get your children – and yourself – into.

Instead of saying ‘It’s not your fault’, which absolves the child of all blame, or the parent insisting ‘it’s all your fault’, which makes it entirely down to the child, the child needs to admit she has SOMETHING to do with it. And therefore, perhaps, she should pay SOMETHING towards the cost of repairing the vase out of pocket money, recognising it (probably) wasn’t all the fault of the child.

We are each somewhat responsible for most of what happens to us – but rarely completely. The parent must teach the child not to ‘take responsibility’ but to take the appropriate amount of responsibility. This is bound to be a bit of a rough guess, but it’s the best that can be done. Just shifting away from a guilty/innocent dichotomy is very healthy – not only in parenting but in all relationships. So learn to take responsibility – you as a parent as much as them as children. Just not too much of it.

We are each somewhat responsible for most of what happens to us – but rarely completely.

But who decides how much? You do. You’re the parent. And that really is your responsibility. Because, as your child is bound to sooner or later remind you, they didn’t choose to be born. And there’s really no answer to that.