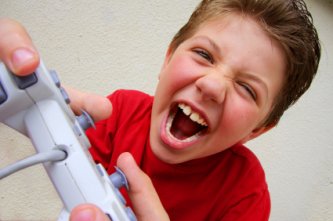 In 2012, there was a 14% rise in young children being excluded from primary school for physically attacking teachers and pupils. John Bangs of the National Union of Teachers says "There's a small and growing group of very young children creating very real problems, over whom parents seem to have no control. It's a relatively new phenomenon for primary schools. They are reporting that groups of parents have real problems with their young children."

Some research suggests that there is a link between what children see and what they do. So, if they see violence on TV, at school or at home, they are more likely to adopt this sort of behaviour. Violence, begets violence. The American Psychological Association's position on violent TV is essentially that children who are exposed to violent TV programmes may be desensitised to violent acts. It may also increase the likelihood of them copying the acts depicted.

Well obviously you should keep a close eye on the sort of programmes that your child is watching. But ultimately, remember that you are the biggest role model for your child and they will copy your behaviour. Violence takes many forms, so try to make sure that you're neither physically nor verbally aggressive in front of your child.

Dr Robert Needlman, behavioural paediatrician says "Children learn about non-violence first and best at home... Parents who make a practice of never using insults, put-downs and sarcastic comments - either to adults or to children - set a powerful example for their sons and daughters."

Remember that violent behaviour can be a coping mechanism for children. Talk to your child and try to understand what the real issue is. Is this violence coming out of frustration, fear, jealousy? Once you have an understanding of what the issue is, suggest more constructive ways to deal with these sort of emotions. Offer them an alternative to violent behaviour. For example: "If you are getting frustrated because someone is teasing you it's best just to ignore them, walk away and go and play with someone else. If you don't react they will soon get bored and stop. Or, if they persist you should tell your teacher, and you can always talk to me about it. But remember, it's not ok to hit someone even if they are teasing you."

Alternatively, if you suspect that your child is suffering from a more serious behavioural problem, such as ADHD, there is help out there. Go and speak to your GP in the first instance. Often it's not necessary to jump straight into medication. Changes in diet, counselling and so on may be equally effective.

A violent outburst is essentially a loss of control. You can help your child try to take back control before they go too far by suggesting some basic breathing exercises. You might also find them useful when others are trying your patience too!

Others prefer to close their eyes and count down from ten to one whilst breathing deeply. As they count down they focus on the anger gradually leaving them.