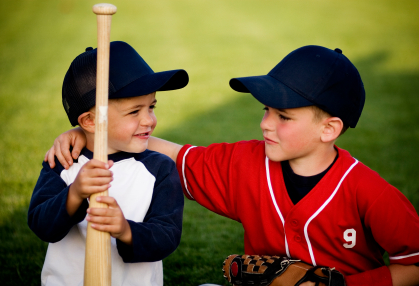 Is your child a good sport?

Being gracious in both defeat and victory are is an important life lesson, and as nine year olds begin to participate more actively in activities of a more competitive nature now’s a great time to instill this behaviour in them.

What’s this all about?

Being competitive isn’t necessarily a bad trait – I think a little healthy competition can be good for children, but sometimes it can be taken too far.

The truth is, if your child is a sore loser or indeed has a tendency to gloat when victorious they run the risk of being excluded from team activities. There’s nothing worse than a child feeling left out, so if you do think there may be an issue, then it’s something worth talking to your child about.

Observe how your child reacts in winning and losing situations – what sort of behaviours do they display?

If you are concerned that your child’s being a bit of a bad sport, then take the time to talk to them about it. It may be that they are unaware of how they are behaving, and its affect on others. Try not to be confrontational, as this can make the situation worse, but talk to them calmly about the sort of behaviour you expect.

Also, talk them through why it’s important to be a good sport – not least because it’s something they’ll probably have to learn if they want to continue to be involved.

Make sure that you too are displaying good sportsmanship – children often mimic their parent’s behaviour, so make sure that you’re setting a good example! Be supportive and encouraging of their endeavours, but not at the expense of others. When you are attending events try to make sure you’re cheering on not only your child, but the whole team.

It’s also important not to pressurise your child to succeed, as this pressure may manifest itself in unsporting behaviour; as they get frustrated at their own abilities or perhaps the abilities of other members of the team.

Being a good sport is (in my opinion at least) more important than being good at sport - or any number of other activities.