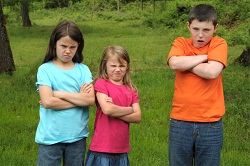 Has your child dropped the ‘F' word yet? No, not the naughty Gordon Ramsay one... The rather more contentious and difficult to deal with one - ‘fair'.

Nine year olds are often incredibly preoccupied with fairness, and unfortunately anything which they perceive to be as unfair is met with a chorus of disapproval.

Ask them to lay the table?

"But that's not fair!" (You may well hear them whine)

"I laid the table yesterday - it shouldn't always be me doing it!"

If you seem to be fighting constant battles over what is and isn't fair when it comes to household chores you might be able to save yourself some aggravation by creating a rota or chart with agreed tasks for your child.

That way they'll know what is expected of them (and hopefully at least) they'll be less rows over what's fair and what isn't. If you like you can also run a reward scheme whereby they can save up points for a treat of some sort. This might come in handy if there are extras which you'd like them to do - perhaps an extra task would mean bonus points earned!

But what about dealing with the concept of fairness more generally?

The truth is that sometimes life just isn't fair; and children need to understand that. So what should you do?

I would suggest talking to your child about various real life scenarios, and try to get them to acknowledge the difference between what's ‘fair' and what's ‘right'.

For example, if someone hits your child, they may feel that a fair response is to go right ahead and hit them back.

However, it's probably not the ‘right' thing to do.

I teach my children that regardless of the situation it's never ok to hit anyone; and if they do retaliate and hit back, they may well find themselves dealt the same punishment as the child who hit them in the first place.

Trying to get your child to focus on doing the ‘right' thing rather than becoming overly preoccupied with fairness will help them to develop maturity, and help them become better at handling these sorts of situations.