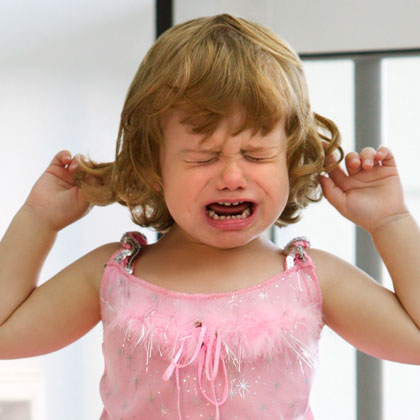 You may have thought that at five, the tantrum stage was over; but sadly no, At five, children still throw the occasional (or even really rather frequent) paddy. In fairness, even the most mild mannered of us will admit to having the odd 'conniption' -  it's human nature. So what are these outbursts about, and how should you handle them?

There are really any number of causes, however most commonly these tantrums are about testing boundaries, boredom or attention seeking (or indeed a combination of the three).

First and foremost, it's really important not to lose your temper and get drawn in. If your child's shouting at you, shouting back will only cause them to shout louder and for the situation to escalate. So, remain calm. Speak in a low, even tone and maintain eye contact. Explain clearly why their behaviour is inappropriate, and how you want him/her to behave.

If your child persists, explain the consequences. For example, if they are misbehaving in the supermarket you might say something like "if you continue to misbehave then I won't take you to the park afterwards". Do not make empty threats. If you've said that you will remove a privilege or treat but they have continued to misbehave, make sure you follow through. Otherwise they'll ignore you again next time too.

Likewise, make sure you talk about it, so that your child fully understands the consequence of their actions.

Finally, make sure that you're not inadvertently rewarding bad behaviour. Some children throw tantrums just to get attention - and it works, right? They certainly get your attention! Try to praise and reward good behaviour too. Going back to the example of your trip around the supermarket: if your child behaved well, say something like "You were really well behaved and very helpful in there. I really appreciate it. Once we're home and have put the shopping away, let's play a game." This sort of thing helps your child learn that good behaviour yields rewards.

When your child was a baby, or even a toddler, you probably took lots of photos, however as they grow up it's easy to get out of the habit. This month, get the camera out and take a few snaps. They don't need to be formal ‘posed' photographs; often the best pictures are taken on the hoof, when your child is engaged in play. Children grow and change so quickly, and you'll treasure these captured moments in the future.