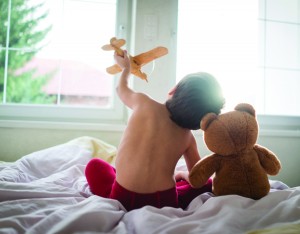 Harry Wallop feels the pressures of the new school year while hosting yet another furry friend.

As I return home on Friday night, having navigated a week of getting four kids back to school and all that this brings, I trip over a small wheely suitcase in the hall. ‘Whose is that?’ I say grumpily. ‘It’s Rex’s,’ says my wife. ‘We’re looking after him for the weekend.’

Rex, it turns out, is the school’s stuffed bear. Not actually taxidermied, just a stuffed toy.

Inside his suitcase is a large album, containing photographs, drawings and captions, filled in with great care by the previous custodians of Rex. Rex at a fireworks evening, Rex having a midnight feast, Rex at the swimming pool in goggles and trunks. Rex is quite a party animal.

‘No, the five-year-old.’ Indeed, he is. He has plans for Rex, clearly seeing the album as a competition. Rex’s weekend with us must top all his previous adventures. As the journalist in the house, I am designated with ensuring Rex gets a suitably lavish double-page spread. The five-year-old is the youngest of our four children, so I consider myself quite an old hand at this whole look-after-the-school-terrapin-for-the weekend thing. Handing out an animal to certain pupils has now become as much a staple of modern school life as fidget spinners and letters from the head about sun cream. Sometimes it’s  a special treat for good behaviour, sometimes it’s just arranged by rota.

...Rex’s weekend with us must top all his previous adventures.

In the past few years, we have cared for a number of nursery or school pets, including various hamsters, whom we have managed not to lose under the skirting boards, though it was a close shave. The most fun was some recently hatched chicks, who managed to melt even the hardest most-cynical hearts in the house. They did very little, except cheep-cheep in a tray and bob up and down like extras in an Easter advert. All you had to do was ensure their tiny saucer of water was kept topped up.

It turns out that there are a number of enterprising suppliers of “living eggs” to schools. They provide the school with eggs, kept warm in an incubator. The class then gets to watch the eggs hatch, look after the chicks, and – just when the chicks might become a handful – they get handed back to the supplier who sells them onto a free range farm. They should introduce them to offices. Cheaper and more fun than offering free gym membership.

The live animals are a doddle. You just have to make sure you don’t kill them. Unlike a friend of ours, whose daughter was given the nursery rabbit to look after on its inaugural weekend trip. He decided the rather bulky hutch would be best kept in the garden. On the Sunday morning, he found a north London fox had half-savaged the pet. Let’s just say his daughter is still in therapy.

The live animals are a doddle. You just have to make sure you don't kill them.

Rex, however, was even harder work. He required more handling than an A-list rockstar with a difficult rider. To fill a double-page of an A3 album requires quite a substantial photo-shoot: Rex having toast, Rex cleaning his teeth, Rex joining the five-year-old at a birthday party, Rex having a “hair cut” alongside the five-year-old. It was exhausting. Every shot would be vetted by the five-year-old, like a supermodel’s agent.

Various activities were especially undertaken just to prove we were a go-get it family, not the sort of family that, in all honesty, wants to spend the entire weekend slobbed on the sofa watching cartoons. So, we hauled ourselves off to the local city farm just for the album’s sake. On Sunday night, long after the five-year-old was in bed, I was still on my hands and knees with Pritt Stick and the guillotine, trying to do justice to Rex’s Great Weekend.

If nothing else, the five-year-old has been given a lesson in the stresses and strains of maintaining a social media profile. Rex’s high jinks and accompanying photographs were no different from those fashion bloggers, wellness gurus and teenage singers that fill up so much of Instagram with their experiences – mostly staged, mostly faked like Rex’s haircut.

As for me, it was another painful reminder that back to school means yet more school projects, which in turn guarantee hours and hours of the parent’s time spent printing off things from the computer and emergency late-night-dashes to buy glue and paper. I wonder whether Rex had  fun. It was hard to say.