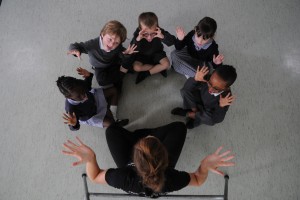 This week, I shared this article on social media. I read a lot about child development and probably share more articles than my friends and family would thank me for. But this article seemed to strike a chord with people and I think it’s probably because it’s both a compelling story (who doesn’t love a tale of success against all the odds?) and also contains an intrinsic truth that resonates.

Eight years ago, Feversham Primary School in Bradford was in ‘special measures’. Staff morale was low, results were poor and parents didn’t want to send their kids to the school. The school was all set for a downward spiral when the Head Teacher made a surprising move.

Naveed Idrees decided to embed music, drama and art into every part of the school day, with up to six hours of music a week for every child. The results made the headlines last year. The school made it into the top 10% nationally for pupil progress in reading, writing and maths as well as a boasting a whole host of other impressive statistics.

The turnaround is even more notable given the makeup of the school: 99% of its 510 children don’t speak English as a first language, being mostly from Indian, Pakistani and Bangladeshi heritage. Half arrive at school unable to speak a word of English.

The story makes a compelling case for the importance of the creative arts in children’s development and chimes with much of Perform’s values. We must take a holistic approach to children’s learning. Academic progress goes hand in hand with emotional and social development. As Idrees says: “At its most basic, the simple act of game-playing can help children learn social skills such as eye contact and taking turns, while listening to music in an hour-long assembly helps develop their concentration in an age dominated by smartphones and tablet computers.”

When we shared the same article on our Perform Facebook page, one follower commented: “Considering of course music is essentially maths, duh”. Well yes, “duh” indeed. It seems obvious both that creativity feeds intellectual development but also that it’s essential for there to be a joy to learning.

That joy is exactly what we try to generate with our Perform4ALL Project which offers free drama and dance classes to primary schools across London and the South. The demand for the sessions is staggering. Each day during term time, our Perform4ALL team visit around 25 schools but is it enough?

This article notes the disparity between the skills learnt in schools and those required to succeed in the workplace and makes for some interesting reading. According to Future Jobs Report, ‘creativity’ is cited as one of the most important skills needed to thrive today.

As funding for the arts is being squeezed in favour of core subjects, we must work harder than ever to make sure creativity is still present in our children’s lives.