What to do if your child is being bullied 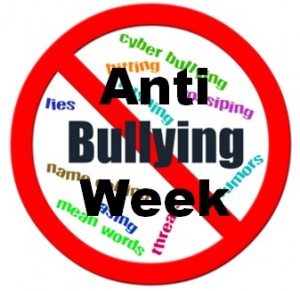 Next week is Anti-Bullying Week and, as part of our Perform For Schools programme, we are delivering lots of Anti-Bullying drama workshops to primary schools across London and the South East.

This interactive workshop for 7-11 year olds has been running for a number of years and is generally extremely well received. It covers the following:

Helping children deal with bullying is something very important to me because I was bullied as a child and those of you who were too will know how awful it is. However, I have discovered something worse than being bullied yourself and that’s your child being bullied!

Last night my 8 year old son got very upset and told me that he was being teased at school (and had been for a while) because his teeth look ‘different’ (he has lots of new teeth coming through and some of them are crooked). We spoke extensively to him about it and how he could respond to the teasing but it had obviously upset him very much and must have been going on for a while before he told me.

At Perform, I speak to a number of parents who are going through the same thing so I thought I’d blog about some of the techniques we cover in the anti-bullying workshop in case it’s helpful to other parents in a similar situation.

One of the things you can do easily at home is to do some simple role-play (we did it in the car on the way to school) called “Throw away hurtful words”. You should explain that sometimes bullies say things that are hurtful but they are just words and you can take the power out of hurtful words by physically ‘chucking them away’ like you would if you were throwing away a ball. For example, choose someone and say “I don’t like you”; ask them to catch the words, hold them in their hand like a ball, then look at them and throw them away. Then say something positive back like “Well, I like myself”.

You can also look at how to respond to hurtful words by giving examples, such as:

When doing this role-play, it’s also important  to encourage a strong voice and good eye contact at the same time.

There are lots of short and simple exercises that you can try but, most importantly, talking about these issues before they happen will prepare children if they ever become the recipient of bullying. Equally, how we treat each other in general terms with your children will educate them about how any form of bullying is hurtful and can affect others.