150 years of Alice in Wonderland 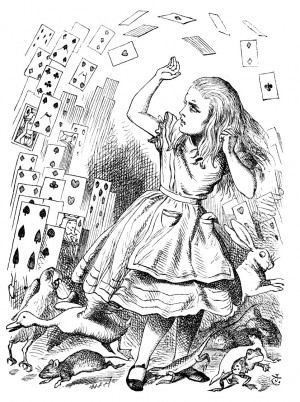 This year sees the 150th anniversary of Lewis Carrol’s Alice’s Adventures in Wonderland. It's no surprise that this book has stood the test of time and is still as popular in 2015 as it was when first written and read by the likes of Queen Victoria and the young Oscar Wilde.

The real Lewis Carroll was Charles Dodgson, an Oxford University mathematics lecturer, who dreamt up the Wonderland stories whilst boating with the Liddell family and their daughters Lorina, Alice and Edith. The girls enjoyed his fantastic tale so much they asked for it to be written down. Two and a half years later, Alice’s Adventures in Wonderland was born and eventually published by Macmillan in 1865. Since then, this enduring literary creation has never been out of print and has been translated into at least 176 languages.

Some call it the first children’s book “just for fun” and, whilst there are lots of political and social undertones, the pure nonsense elements of the book are incredible. I think that’s why it resonates so well with children both young and old!

Alice’s Adventures in Wonderland is a true classic and part of our shared culture having been adapted into countless films, plays, ballet and endless art forms with the characters and scenarios even appearing in other works.

I actually saw a spectacular production called Wonder.land at The Manchester International Festival earlier this year (which will be on at The National Theatre this Christmas), where Wonderland is actually the internet and the blurred boundaries between our online and offline lives are explored. I wonder if Charles Dodgson could ever have imagined that a century and a half after its inception his book would still be so inspirational?

There’s a whole website dedicated to this year’s events to celebrate the book and, here at Perform, we have our own celebration with a mini-musical version of Alice in Wonderland written especially for 4-7 year olds. This is the focus of our October half-term holiday course and, like the book itself, it's one of our most popular holiday courses.  Who doesn’t love the bossy White Rabbit, the formidable Queen of Hearts and the inimitable Mad Hatter?

Why not take a look at the video featuring some of the songs from our Alice half-term holiday course and, if you have a 4-7 year old that would like tumble down the rabbit hole this October, find out details of your nearest venue online and book a place today.