Children and shyness - are parents sometimes to blame? 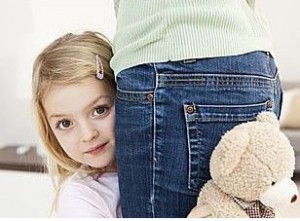 Careful the things you say. Children will listen.

Forgive me quoting one of my favourite Stephen Sondheim songs from Into the Woods but these are wise lyrics and I do think that we should be extremely careful about what we say. Children really do listen, and they listen to their parents the most.

In my role, something I hear a lot of parents doing is talking about their children within ear shot of their children and describing them in different ways. A word that comes up a lot is that the child is ?shy'.

If you read my blogs regularly, then you'll know that I have a bit of a bugbear about the word ?shy'. I don't like the word and I would never use the word ?shy' to describe a child.

The dictionary says that 'shy' means

Having or showing nervousness or timidity in the company of other people.

Plenty of people are nervous or timid in the company of other people and children are no exception. In fact, it makes sense that children might naturally be more timid in front of new people because their experience of meeting new people and being in new situations is more limited than adults.

But that doesn't mean that they are ?shy'. It just means that when they meet new people they are more wary, and take a bit of time to warm up.

I believe that too many parents label our children as ?shy' and, as a result, what is perfectly natural behaviour can give rise a deep rooted problem. It doesn't take long before the child learns to behave 'shyly' because they feel that's how they should behave. And, after a short time, they believe they have a 'shy' personality. Being ?shy' almost becomes their shield.

So, while I agree that there are children who are under-confident, I really urge parents to not use the word ?shy' to describe their child. Because ?children will listen? and labelling them in this way could be the most counter-productive thing you can do.

Drama has been proven to be the most effective activity to help overcome confidence issues and we are extremely passionate about helping children with this. I often describe our Perform workshops as being 'confidence medicine' for children. It's probably the most rewarding element of my job - seeing and hearing how children have changed dramatically through drama.

I would love to hear your thoughts on 'shyness' and lack of confidence so please get in touch.

From Ida 25th June 2013
Somehow I agree but on the other hand having a daughter who's been diagnosied with dyspraxia unfortunately we have to say she is very nervous in the company of other people/ kids ie..shy!! Although labelling is not acceptable it is present and even teachers describe her as such in her school reports!!
020 7255 9120