Taking your children to the theatre - Lucy's Top 10 Tips 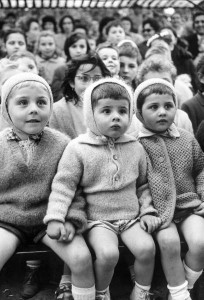 We all know the magic of going to see a live performance. And I really believe (well I would, wouldn't I?) that it's really important to expose children to live theatre from as young as you can. And what better time to do this than in the panto season? The time of year when every town and sometimes even village has a pantomime for you to take your child to see.

The great thing about going to see a pantomime is that they are primarily designed for all the family so you don't have to worry about children making noise, dropping sweet wrappers and getting up to go to the loo. However, I did think it might be useful to put together some top tips for taking children to the theatre generally. As part of my research, I asked our Regional Partner and veteran panto director, Simon Fielding, what his top tip for taking children to a pantomime was. His response: "Don't be afraid of them making noise, pantomimes are meant to be crazy".

1. Find a suitable show to go to see. Don't be too ambitious and take your child to see something that isn't suitable for their age-range. 2. Before you go, explain theatre etiquette to them. Tell them it's not like a cinema because the actors are performing live and too much noise is off-putting for them and the rest of the audience. 3. Go online to learn a bit about the show you are seeing in advance. Show photos or illustrations to your kids. Explain the plot to them. Tell them who the major characters are and why they'll be doing what they do and if it is a musical play them some of the songs on youtube. Don't worry that it'll spoil the show, they'll be entranced by the live show. 4. Book an aisle seat whenever possible so that, if you do need to nip out to take them to the loo, it doesn't disrupt your neighbours. 5. Even so, take your child to the loo just before the show starts and in the interval so that you can avoid going during the performance. 6. Sweet wrappers are really noisy. My drama teacher at school used to ban us from taking sweets to the theatre but I think that's a bit harsh. Maybe take your own ?quiet and suitable food' which isn't noisy to unwrap and not too sugary (the sugar-rush is a big reason why kids get over-excited at theatres). 7. Having said that, you can help ensure good behaviour by bribing them with an ice cream in the interval. My mum would buy us an ice cream right at the last minute of the interval, to reward good behaviour and also ensure we were quiet for the first 15 minutes of act 2. 8. Theatres are fascinating places. Get into the auditorium early and walk around showing your children the sound desk, orchestra pit, the different levels (stalls, circle, gods). Explain to them the different elements that put together a live show. 9. Take them backstage afterwards. The actors have to come out and, if you can get an autograph from some of the cast, then it'll add to the excitement for your child. 10. My final tip: most musicals have a "Playout" which is played by the orchestra when the audience are leaving. To support the musicians and avoid the crowd all scrabbling to get out first, wait till the music is over and give the orchestra a little clap. And if you are in the stalls, walk down to look at them play.

From sionaidh craigen 9th May 2012
Good site. Clear. I totally agree that all children should be exposed to the theatre. Preferably while quite young and then go at least once, if not two or three times per year.. as well as be able to perform in groups on a real stage! It's naturally inside so many of them..even the shy ones!

It's magical and adds to their childhood enormously.

I wish there were a Government scheme so that every family (on a reasonably low income) would be given free tickets for Theatre performances and workshops!!

This would then also encourage
parents who would not normally think this way, to take their children!

It adds so much to their education.

I rarely had the money to afford to take my children to the Theatre!

I think it would go quite a way to solving some of the crime/vandalism situations in this country too!! If youngsters had a 'safe' and creative environment!
020 7255 9120