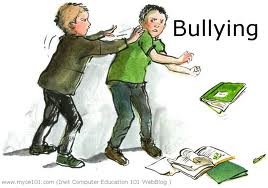 No, this blog post is not about the toe-curling anti-drugs eighties-fest that is the Grange Hill Just Say No video (though it's worth having a look if you fancy a nostalgia-based giggle). It's about a much more prevalent problem in primary school at least - bullying.

I was bullied a bit at school when I was a child. Not obviously and not aggressively. I never had lunch money taken but there were a few bigger girls in the class who picked on me by leaving me out of games and playdates and teased me because I was smaller than them.

I was a quiet little girl and not particularly confident and I found it hard standing up for myself. People who know me now find it hard to believe but, when I was 6 years old, it was a daily occurrence and, as anyone who has been in the same position will know, being bullied is a horrible lonely experience that can make you miserable 24/7.

I used to be so happy on Friday afternoons knowing that I wouldn't have to see the bullies until Monday. But on Sunday, the sense of dread would come back to me and I'd feel sick on Sunday nights. And, because they weren't putting my head down the loo or stealing from me, I didn't feel that I could tell anyone. I guess I didn't really realise that I was being bullied.

Of course, these days, you can't open a glossy magazine without reading how some celebrity or other had a terrible time at school - apparently Tom Cruise was bullied because of his dyslexia, Kate Middleton quit her first public school for being too ?skinny and meek' and Kate Winslet was bullied for being overweight. Some of these articles seem to suggest that the bullying is a reason for the subject's subsequent success - "what doesn't kill you makes you stronger" often appears to be the unspoken moral behind these inspirational stories. But hindsight is a wonderful thing (especially in celeb articles) and it's undoubtedly true that, for every Tom Cruise or Kate Winslet, there are many more adults who aren't able to look back smugly and have the last laugh at their less-successful tormentors before boarding their private jet to Hollywood. For many children, bullying can have long-term damaging effects and it's essential that it is nipped in the bud at the earliest opportunity.

A few years ago, a mum of one of the little girls I teach told me that her daughter was being bullied at school and, because of my personal experience, my heart went out to her. The mum said that Sarah was finding it difficult in standing up to certain "influential" children in the class. They were trying to make her do "stuff that was naughty" and she wanted her daughter to feel able to resist the peer pressure without coming under attack.

One of the things that we really concentrate on at Perform is confidence and, it seems to me, that confidence really is the key to preventing bullying. Bullies are often cowards who work in groups and are finely attuned to those who seem weaker or less self-assured than themselves. My view is that, if you can rehearse a child standing up for themselves in a safe non-confrontational role-play environment, you can prepare them to do the same when faced with a real bully.

So I devised a game called ?Just say No?. It's a drama role-play exercise which can be played with children as young as 4 to help them understand how they can stand up to people who try and make them do things that they don't want to.

It's very simple and can be played with a whole class or just one to one with your child at home. The aims are to get children to articulate why they don't want to do something and give reasons strongly and clearly. We always get excellent feedback after playing this game with Perform children and I'm posting it below for you to play either at home or at school (if you are a classroom teacher).

Just say NO ? Choose who is going to be Child A (the bully) and Child B (the person being bullied). ? Ask Child A to try to persuade Child B to do something which is ?naughty'. For example, making a face at a teacher, taking someone's pencil without asking' or standing on a table ? Child B explains why they don't want to do it ? This should lead to a conversation where Child A tries and tries and tries to get Child B to do something ? Child B must be resolute and keep reiterating why they don't want to ? The game continues until Child A backs down.

Please let me know if you get chance to play it and what you think.

Bullying is a serious problem and, it goes without saying that, if you know or suspect that your child is being bullied, you should speak to somebody at the school about it immediately. For more information as a starting point, see my article Dealing With Bullying.