Is this the Beginning of the End for Child Benefit? 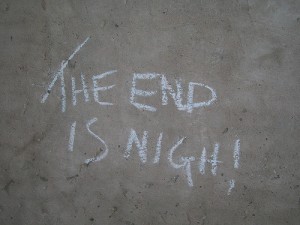 While many people believe that it's fairer that 'wealthier' families are targeted, there has been considerable anger regarding the anomalies within the proposal.

Essentially, households where both parents each earn slightly less than £44k (adding up to a combined income of nearly £88k) will retain their child benefit; whereas households where just one parent is earning over £44k will lose it. As such, the cuts are likely to hit lone parents and families where only one parent works.

The implementation and its obvious unfairness have been much maligned elsewhere and I'm not keen to go over old ground.

To be honest, I'm more concerned about what this decision means for the longer term. I fear that this may indeed be the beginning of the end for child benefit. And, if child benefit, then why not all universal benefits and services?

In paying child benefit to everyone, the Government is saying, "Whoever you are and however much you earn, by raising children, you are making an essential contribution to society as a whole." Without going all Whitney (circa 1986) on you - children are our future. Our future tax-payers. The people who will ultimately pay for our heart-bypass operations and pensions. A falling and/or ageing population is not good news for economic growth.

So why would a government want to make life even harder for those who are already sacrificing so much to raise these future bread-winners? And, by the way, life will be much harder for many. For a three child household with one parent earning £44k , child benefit amounts to around 7% of net income.

But this considerable financial effect isn't my main worry. Even on top of all the other cuts that will disproprotionately affect families with children - eg. Child Tax Credits, Child Trust Funds and the Pregnancy Health Grant.

No, my big concern is that this decision could well be the thin edge of the wedge for the concept of the universal service - ushering in a new era where the state is only there to provide a safety net against destitution.

If that seems dramatic, then hear me out...

Child benefit's greatest strength has always been that it is universal. That's why it's survived so many successive governments desperate for cuts. From 2013, it will effectively be a means-tested benefit like a broader income support or jobseeker's allowance.It will lose its special status and will become vulnerable. Over time, it will whittled away by successive Governments until it is eventually abandoned or subsumed into something else.

"So what?", you may say. "It it has always been an anomaly so good riddance."

As recently as a year ago, George Osborne said he would preserve child benefit - for decades paid to millions of families irrespective of their income - as it was "valued by millions" of families.

Now he says he can no longer defend paying out £1bn a year to better-off families and the one-off cut "made sense" given the scale of debt and welfare spending he had inherited.

And if "better-off" is currently defined as a household earning £44k a year (soon to be £42K by the way), how many more will be caught when the goalposts move to include the "average" income?

Now I understand that tough decisions have to be made and that the cuts have to come from somewhere. But the idea that poor people shouldn't pay tax that gets handed out in benefits to less poor people is not self-evident. No matter what you earn, you have access to the NHS and free state education paid for by all tax-payers and no-one believes that's unfair. Yes, we could force anyone earning over £42k to pay for their healthcare and save lots of money but no-one is suggesting that. Yet.

But, with the axing of this first well-established universal benefit -what's to stop the same logical conclusion being drawn to anything else the state provides for us that we can afford ourselves? And, if that happened, what would it be like? Oh yes, the USA...

Wouldn't a much better solution be to have limited child benefit to the first child? No extra admin and no greater chance of fraud. Almost certainly a greater saving. And it would still be universal which, in my humble opinion, is Child Benefit's most essential quality. Tear that down and who knows where we'll be in ten years?

What do you think? Should child benefit remain universal? Or would you be happy to see the end of universal benefits? Do let me know via the comments...

From Lucy Quick 14th October 2010
@Sian - I do understand where you're coming from, however I'm still concerned that not everyone who is considered a 'high earner' can afford to lose their child benefit.

@Sue - thank you for your comment :)
From Sue Barksby 13th October 2010
I wholeheartedly agree, Lucy. A really interesting and insightful post. However you feel about this cut, it really is a watershed moment for the protection of universal benefits and flies in the face of everything David Cameron and George Osborne said until very recently.
From Sian Smith 13th October 2010
Being classed as a high earner, i would absolutely support the childcare benefits going to those that truly benefit. I would happily forego my childcare contributions and know of many mums who feel the same.
020 7255 9120