Dealing with Other People's Children 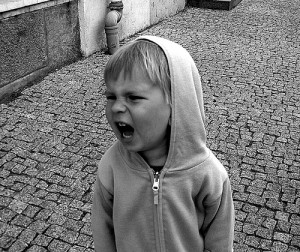 Pretty much everyone who works at Perform deals with other people's children on a regular basis.

For the most part, the children are pretty well behaved. They are often high spirited so the challenge is normally getting them to focus their energies. But of course from time to time we do have to deal with more serious behaviour; for example if a child is doing something that might be dangerous either to themselves or to others.

But, in my own experience, when it comes to taking care of other people's children in a home environment - for example if your child has friends over for tea - dealing with bad behaviour can be quite a minefield.

Every parent has different ideas when it comes to correcting behaviour; so how do you deal with it? Is it a case of your house, your rules? But what if your rules differ from the child's own "house rules"? It's tricky isn't it?

When I was growing up, if I misbehaved at another child's house I would expect to be disciplined in some way - most likely a good telling off! Go back another generation, and if you were a child misbehaving on the street, any adult might see fit to give you a talking to. Now I think we're a lot more cautious.

Personally I wouldn't have a problem with another parent taking reasonable steps to correct my child's behaviour - obviously I wouldn't be happy to hear that another parent had shouted at my child or said something horrible to them; but I'm a firm believer in teaching children that there are consequences for their actions. So, if they misbehave at someone else's house, and that parent reacts in a proportional way - e.g. they get given a time out; are told that their behaviour isn't appropriate etc - I think that positively reinforces what I've been teaching about behaviour at home.

However, I do know some parents who feel quite differently. Some are so frightened of saying or doing the wrong thing that they have decided that, aside perhaps from preventing something obviously dangerous, they will not attempt to correct bad behaviour at all.

Plus, to make matters worse, they often don't even tell the child's parents that there were any problems.

I think that this is a mistake. None of us like to hear bad things about our little darlings and we're all capable of being a little sensitive about this. After all, it can sometimes feel like someone is criticising not only your child, but your skills as a parent. But on balance, I'd always prefer to know if my child has misbehaved so I'd have the opportunity to talk to them about it.

So, over to you - how do you deal with other people's children who misbehave?

Do you take steps to correct the behaviour, or do you just let it go? Does it depend on the child, (or perhaps, more accurately, how well you know the other child's parents)?

Do you discuss this sort of thing with other parents before they have your child/children over to play?

I'd love to hear your thoughts!

From Lucy Quick 24th May 2010
That sounds awful, particularly as his Mother didn't seem bothered about the situation at all. I totally understand your frustration.

For what it's worth I think you did the right thing by explaining the situation to his Mother, of course how (or if) she decides to deal with it is another matter altogether.

Hope your daughter's ok x
From alison kiersz 24th May 2010
i experienced a situation with a child the other day who has constantly put my child down or pushed / hit her. he then happened to use a word to me about her and was trying to convenice me that she had done this. ok he may not have fully understood the word but it was used half a dozen times. when i mentioned it to the mother she said "he probably doesnt know what the word means". whether he does or doesnt its the word that he was using at the time and she couldnt understand why i was fed up with her son putting my daughter down.
From Lucy Quick 10th May 2010
Hi Susie,

Thanks for stopping by and commenting.

Totally agree with you, in your house your rules should apply :)
From Susie 10th May 2010
If my children have over kids that don't know boundaries and are for instance jumping on my couch, they will learn the rules of my house and abide by them if they want to continue to play in my house.
020 7255 9120