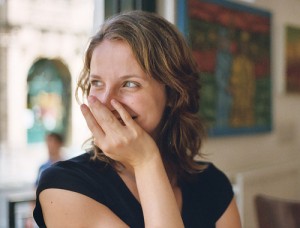 I was chatting to a few parents after a Perform class this week, when one of the children came running up to me; very excitedly:

Amused and somewhat intrigued I said yes, of course. He rolled up the leg of his tracksuit bottoms to proudly display a very large bruise.

"Wow" I said "That really is massive, but you know it's called a bruise, not a brew."

Fabulous, eh? It's hard to argue with logic like that - anything with an 's' sound is plural :)

It got us talking about the other funny things children say - ranging from the cute to the cringe-worthy:

One parent shared something her little girl said when she returned home after her aerobics class - "Mummy, you're raining!". Horses sweat, men perspire... and ladies merely 'rain'.

Another shared a story of how when whilst cooking in the kitchen she (like many of us) was doing the running commentary thing - "So we open up the can with the tin opener... Can you say tin opener, darling?"

Another shared a similar story about the running commentary habit - apparently it was vexing her little one somewhat, as one day mid commentary, her daughter gave a huge (very adult sigh) and said "Mummy please be quiet." Her Mother said she'd never seen such a good impression of herself.

"Mummy, are we going to steal this shopping or pay for it?"

Shocked, she replied "We're going to pay for it of course, we don't steal things."

She'd absolutely no idea where her daughter had got the idea of stealing from (perhaps Robin Hood?) but was sure she was about to get stopped and searched by the security staff. Fortunately they managed to make it out of the supermarket without further incident!

Of course as parents, we will at least get the last laugh; as doubtlessly we'll be at pains to remind our children of all the embarrassing things they've said over the years...

And so, over to you dear readers - I'd love to hear about the funny/embarrassing/adorable (delete as appropriate) things your children have come out with...