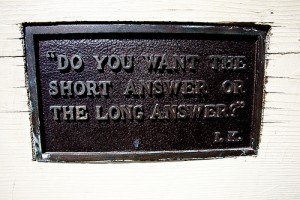 Earlier this week I read with interest an article on the SchoolGate blog by Sarah Ebner.

I don't want to re-hash the article here, but by way of giving a little background - the article detailed the experiences of another parent, Joanne Mallon who has a son who is small for his age.

She recalls a situation her son experienced at school. The class were playing a game whereby they had to describe a fellow classmate without describing them physically. One child blurted out "He's small". As Joanne recalls it: "The teacher came down on this like a ton of bricks, because it was outside the rules of the game..."

The article generated a number of comments and got me thinking.

Clearly we live in a very visual society, and ordinarily when asked to describe someone we will often use physical characteristics. I'm not sure that it's necessarily the right thing to do, and of course we all want our children to know that they are much more than the sum of their physical attributes.

For me, the idea that a teacher would "come down like a ton of bricks" is a little worrying - particularly in this instance. It may be that the child who blurted out "he's small" misunderstood the game. Of course, conversely it may be that he did it knowingly - children can be cruel.

Of course it's also entirely possible that the phrase "coming down like a ton of bricks" is over-egging the teacher's reaction somewhat.

The truth is, what we're really lacking here is context. We weren't there. We can't possibly know:

Even those individuals who were actually present would probably give slightly different accounts. It all depends on your perspective, right?

So, where do I stand?

I wouldn't want my own child to be 'labelled' as anything. I think that labels are limiting and potentially harmful. But as parents can we really prevent it?

I think perhaps what we ought to be teaching our children is that everyone is different. We all have different physical attributes. Indeed it would be a very dull world indeed if we all looked the same.

I think it's important to discuss things like this. We want our children to be able to empathise with others. We want them to embrace differences - not to see them in terms of positives or negatives.

Is being short a bad thing? No, of course not.

Is being mean about someone's height a bad thing? Yes.

Is describing someone as small a bad thing? Hmmmm - here it gets tricky, doesn't it? Because, once again it depends on your perspective.

If a child is sensitive about their height it may be that by describing them as small you've hurt their feelings.

If you did so deliberately to hurt their feelings then that's really not a nice way to behave.

If you did so unknowingly - i.e. you didn't realise it would hurt their feelings; well - now you know, so you might think twice before doing it again.

Which brings me on to this: Is it acceptable to call someone small if doesn't upset them?

I'd love to hear what you think - feel free to add a comment and let me know :)

From Lucy Quick 4th December 2009
@John - re the "ton of bricks" remark, I agree, I'd certainly like to hope so in any case!

Your comment about empathy is an interesting one. I certainly feel that learning to empathise is a key part of a child's emotional development, and one which we all should take responsibility for - both at school, at home and as a society.

@Rosie I'm totally with you. We are all so much more than the sum of our physical attributes and it's a really important lesson to teach our children.

Thank you both for sharing your thoughts :)
From Rosie Scribble 3rd December 2009
I'd like to hope that the aim here was for the children to focus on qualities other than physical appearance, such as kind and caring. I can see that it's a useful exercise but only if it is done properly. I would hate my child to be labelled, especially if that label became a problem. As she grows up I hope she knows there is more to her than just her physical appearance and that she has a range of good qualities. Interesting post, thank you.
From John Connitty 3rd December 2009
This is an excellent summing up of the discussion but there is obviously no clearcut answer.

Having read the original post, I think the "ton of bricks" remark was designed to approve of a teacher who was supportive of the child. I suspect the reality may well have been a gentle admonishment.

My feeling on the debate is that children (and some adults) should be taught empathy as part of their education and this includes being aware of when we may hurt another person's feeling whether it's because of their unique characteristics or otherwise. Empathy is something which is becoming noticeably scarcer among adults and children in all public situations (talking loudly on mobiles, eating on the tube, shouting in public etc. are all examples of this) and I feel the above debate is really a small example of a much bigger problem.
020 7255 9120