Will school theatre trips be a thing of the past? 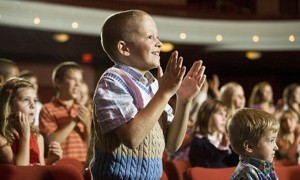 Sarah O’Keefe is Head Of Drama at the highly-regarded La Sainte Union school for girls in Hampstead. As this week’s guest blogger, she discusses the recent changes to the curriculum for Drama GCSE.

As all drama teachers will be aware, from September 2016, all the GCSE exam boards are changing their specifications for Drama. Looking at these changes, I was disappointed to discover that some boards have made a decision that live theatre need no longer be 'live'. Instead, students will evaluate plays by watching a recording of a play in the classroom. See here for more information.

In my view, this is a surprising decision. It was apparently made to eliminate inequality amongst students who do not have the financial means to attend theatre performances. Ironically, it will probably have the opposite effect of what was intended. Pupils watching videos of plays will almost certainly fail to be inspired whilst children from families who attend the theatre regularly will have the opportunity to see live shows, widening the gap between advantaged and disadvantaged students further.

Ultimately, watching a video of a live performance is a poor substitute for being there in the flesh. How can students experience the 'in the moment' excitement and electricity that only live performance can create? How can they analyse the actor/audience relationship from watching a recording on film? A play is meant to be performed to a live audience. The actors' reactions, facial expressions and relationships can be lost when videoed and the sound also has a different quality. Watching recordings of plays can be a good supplement to watching a live performance - it can be used to jog students' memories, or look in detail at one particular moment or scene - but it can never be a substitute for the real thing.

All exam boards require Drama students to perform as part of the GCSE qualification. How can pupils perform effectively if their only point of reference is an episode of Eastenders or a video of a play? Film and theatre are completely different mediums - performing for the camera requires different skills to performing for an audience. Performing a play without ever having gone to the theatre is like trying to write a novel having never read a book or trying to bake a cake having never eaten.

In my school we cover theatre trips from our (very modest) Drama budget. We ask for a small contribution from the students, except those who are on free school meals, who don't pay anything. Theatre trips are possible for all students if schools make them a priority and, in my view, the benefits offer excellent value for money. There is nothing more wonderful than hearing quieter or normally disengaged students leaving the auditorium exclaiming, "that was brilliant!" and discussing what they'll include in their review.

Children who grow up with a love of drama are always advised to see as much theatre as possible. It will be an enormous shame if young people aren't taken on theatre trips and miss out on these magical, formative and sometimes life-changing experiences. Most Drama teachers have a huge passion for their subject and will recognise the importance of live theatre so I expect they will do their best to take their students to see live performances anyway. Despite these curriculum changes, I hope that senior management teams will support this and allow these outings so that children will continue to be inspired to become the next generation of theatre-lovers.