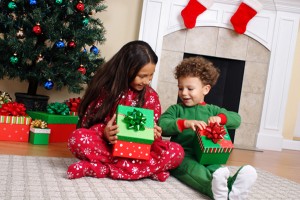 My three year old daughter is a massive fan of classic musical films such as Annie, The Sound of Music and The Wizard of Oz. She likes nothing more than to curl up on the sofa and mouth along the words. Luckily, she has a Mum who is quite happy to sit and watch them with her because they are my favourite films too. Funny that!

So much has changed since I was a little girl though. As well as Father Christmas' visit, one of the main reasons I remember Christmas Day being so exciting was because The Wizard of Oz was on TV. Nowadays we can watch what we want when we want. It's fantastic in some ways but you can't beat that magical feeling of counting down the days and hours to seeing Gene Wilder in Charlie and the Chocolate Factory on New Year's Day as I remember doing as a young girl. (Yes, I'm showing my age now!)

There's no better way of bringing a little festive spirit into your home than by cosying up with your family to enjoy a Christmas film. And whether you tend to watch films on TV, DVD, iPad or even at 30,000 feet, everybody has their all-time family favourites so I thought I'd put together a list of some of the classics you might want to watch with your children over Christmas.

Disclaimer: I have a musical theatre background so there is a lot of singing here - though I did get contributions from the Perform Office too. What I do guarantee is that they will all be brilliant entertainment for you and your kids over the holiday season.

My aim was to put together the Top 10 Christmas Films but we couldn't whittle it down to 10. So here, in no particular order, are the Perform 15 Best Christmas Films. I hope you enjoy them and, if you think I've missed any real crackers (or even under-appreciated or undiscovered gems), let me know in the comments.

The Wizard Of Oz

Dorothy Gale is swept away to a magical land in a tornado and embarks on a quest to see the Wizard who can help her return home. Flying monkeys, green-faced witches and munchkins on the Yellow Brick Road, this is a deservedly popular classic even after an amazing 73 years.

A magic nanny comes to work for a cold banker's unhappy family and succeeds in turning everything upside down. With classic songs and performances, this film virtually invented the idea of a Christmas classic. No festive season would be complete without it.

After inadvertently wreaking havoc on the elf community due to his ungainly size, a man raised as an elf (Will Farrell) at the North Pole is sent to America in search of his true identity. Hilarious comedy kids and parents will love equally.

Macauley Culkin stars in his first big role as an 8-year-old who gets left behind when his family takes off for a holiday. While he's home alone, he's forced to deal with two burglars who have cased the neighborhood to steal Christmas gifts. Using smarts, wit and a few crafty traps, he manages to ward off the burglars and reunite with his family just in time for Christmas.

Willy Wonka And The Chocolate Factory
A poor boy wins the opportunity to tour the most eccentric and wonderful candy factory of all. Gene Wilder, Oompa Loompas, rivers of chocolate and that scary bit in the tunnel that's best avoided.

Surprisingly palatable tale of how Santa manages to do it all with the late great Dudley Moore to help push things along.

On Christmas Eve, a doubting boy boards a magical train that's headed to the North Pole and Santa Claus's home. An animated film voiced by Tom Hanks, this is as spectacular to look at as it is touching and enchanting.

When a nice old man who claims to be Santa Claus is institutionalized as insane, a young lawyer decides to defend him by arguing in court that he is the real thing. Starring Maureen O'Hara and a nine year-old Natalie Wood, this is the real deal ? a Christmas film that has something for both adults and children and makes you want to believe again in all the Santa Claus business.

The Sound Of Music

A woman leaves an Austrian convent to become a governess to the children of a Naval officer widower. Julie Andrews and her beautiful voice in full Alpine family sing-song with evil Nazis thrown in for good measure.

A contemporary classic that embodies a timeless quality that few films of the 1980s have been able to accomplish. The dream casting may be its best asset with Albert Finney, Carol Burnett, Bernadette Peters and Tim Curry. Throughout the film, the songs are brilliantly catchy, danceable, and soaring with emotion, making Annie a well-rounded musical and ageless family favourite.

Inside a snowflake is the magical land of Whoville, populated by the Whos. All the Whos love Christmas ? except for The Grinch, a nasty creature who plots to steal Christmas away forever. Jim Carey stars in this live action film that brings the Dr Seuss classic children's book to life.

Midnight one Christmas Eve, and a young boy finds that the snowman he built that day has magically come to life. The Snowman takes him on a magical journey, flying across countries and to the North Pole to meet Father Christmas

Meet Me In St Louis

A delightful, classic, nostalgic, poignant, and romanticized musical film - and one of the greatest musicals ever made. It tells the story of a turn-of-the-century family in suburban, midwestern St. Louis of 1903. When the family's head is invited to New York due to a job promotion, the uprooting move threatens to indelibly change the lives of the family members forever.

It's A Wonderful Life

An angel helps a compassionate but despairingly frustrated businessman by showing what life would have been like if he never existed. Premiering in 1946 and starring James Stewart and Donna Reed, this heart-warming, bittersweet film still has plenty to give and should be essential Christmas viewing.

From JK Cooney 1st January 2013
Hi Lucy. O somehow came across your article on Christmas films and it appears that the Wizard of Oz has been something of a Christmas/New Year's tradition in Great Britain. Is this true. Has it been something that families have shared over the years/decades. I find it very interesting as it really has nothing to do with Christmas but it apprantly has just eveolved into the the film that people watch in Britain during the holidays.