Ditch the TV this Christmas Day 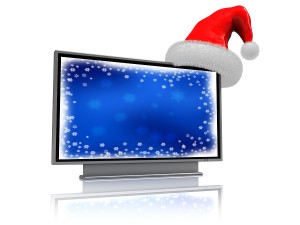 I blogged about Christmas films last week and it made me think about the central role that television plays in the UK's Christmas Day celebrations. From the Queen's speech to countless Christmas specials and ,of course, classic Christmas Day films like The Wizard of Oz, it seems that vegetating on the sofa has become the new traditional way to celebrate what could be a great time for family interaction.

I'm from a big Welsh musical family so television never really played a huge part in our celebrations. Christmas Day activities would more often involve entertainment provided by family members and playing games together like "charades". I cringe now at my cousin Jessica and I making everyone sit and watch our version of The Jellicle Ball from Andrew Lloyd Webber's Cats. We spent hours rehearsing and sourcing fur coats from our grandmother's wardrobe to wear as costumes but, even if our family might have rolled their eyes at the time, we still talk about it now.

One of my best friends is Jewish and, on Friday nights, they celebrate with a Shabbat dinner. No TV, computers or other electrical devices can be used so the children and parents have to be a lot more imaginative regarding entertainment. As a result, they interact much more with each other as a family which is fabulous to see.

So with these examples in mind, I thought I'd suggest some great Perform-style games that you can adapt and play en famille on Christmas Day should you fancy a break from the TV schedules (or should the electricity blow). Enjoy!

This is a classic drama game that is very easy for everyone to play. It's also hysterical fun.

We do this with Perform children and it's a really good way to improve their public speaking skills. For an older age range you can increase the time they have to talk for. Make sure you have a stop watch.

Another classic game that everyone can have a turn at playing.

This is a real Perform staple and one that I play often in the car with my kids.

We play this a lot at our birthday parties. It's really good fun for all ages - adults included!

From Ravikaleova 1st June 2014
We spent hours rehearsing and sourcing fur coats from our grandmotherâ€™s wardrobe to wear as costumes but, even if our family might have rolled their eyes at the time, we still talk about it now.I would like to say Thanks for sharing such a nice article.
020 7255 9120