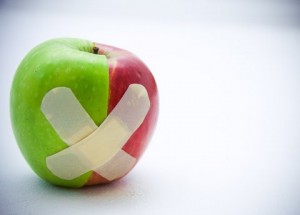 Thank goodness for 24 hour supermarkets. Often I tuck the little ones up in bed and leave the hubby to watch them and then go off to the supermarket all by myself. Late at night it's often nigh on heavenly... Or as close to heavenly as the weekly shop can get!

I recognise of course that I am really very lucky - I have a 24 hour store nearby, and of course someone on hand to look after the children for me when I go.

Others of course have no option but to brave the supermarket with their children in tow. But how can you make the process (relatively) pain-free?

I was watching an old episode of Supernanny USA over the weekend, and Jo shared a pretty good technique. (Just for the record, I'm not a massive fan of Jo Frost - whilst I think that some of her techniques work, I'm not entirely in favour of all she preaches, and indeed the way she preaches it... But that's probably a whole other post!)

The children featured in the show were around 4 and 6 and their poor mother had a terrible time getting the weekly shopping done with them. The technique was pretty simple - put each of the children in charge of collecting some of the groceries for you. Not exactly ground-breaking I know, but the way she did it was pretty good. The children were each given a wristband which had various items attached to it. Plus, rather than being attached in a random order, the item also had the relevant the aisle number so the items would be easier to find, and of course you could string the items on to the wristband in a logical order.

Now clearly this would be some feat of organisation to set up in the first instance - but hopefully once you had it would work pretty well for you in the long term (provided of course the pesky supermarket execs didn't elect to reshuffle everything!).

Even if you didn't elect to do the whole wristband thing, getting your children to help with the shopping is a pretty good way of keeping them occupied... and minimising the pestering for various foodstuffs which aren't on your list!

When I do venture to the supermarket with my two there are a couple of things which I try to do - firstly as far as possible I'll not take them when they're hungry or over-tired - it's a sure-fire route to a tantrum otherwise! I also always make sure that I have a list, and wherever possible I'll go to a supermarket where I already know the layout pretty well - it saves the searching, and means you won't accidentally end up in the chocolate aisle... Mmmmm chocolate... Sorry, where was I?

If it all begins to go a little pear-shaped I'll distract them with anything I can. A silly word game like the Magician's Cat can work well. To begin, say the Magician's Cat is an (something beginning with 'a' cat - e.g. an angry cat). Take it in turns to go through the alphabet. Alternatively a game of I-Spy, or Simon Says can also work well - particularly if there are queues at the tills.

I'll also try and schedule something fun for afterwards - a trip to the park, a snuggle on the sofa with a favourite story etc; and make sure the children understand that once we've got the shopping out of the way we'll be doing something nice.

So how do you handle shopping with your little ones? Do let me know via the comments :)

From Lucy Quick 10th May 2010
Hi Mummy Zen - ah yes online shopping is the way forward :)
From Mummy Zen 10th May 2010
That sounds a good idea to get them involved in the shopping. Your suggestion of doing something fun afterwards is a nice idea too. My child is still a bit too young to start supermarket tantrums but he does get tetchy if I take too long in there!

I do a big online shop each month to stock up on the major things and then in-between either my husband can stop by the supermaket he passes on his way home or else, it just means a quick trip for me to get more milk or a few bits and pieces. So I guess my tip, is to avoid the supermaket with your children as much as possible :-)
020 7255 9120