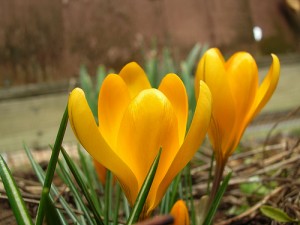 Spring has sprung! Well slightly. We've had a couple of nice days here in London - I'm seeing crocuses and daffs popping up - so as far as I'm concerned, we're there. The good news - longer, lighter days... the bad news - it's probably time to Spring clean.

Why do we clean in Spring?

According to Wikipedia the tradition comes from Iran where - the practice of "khooneh tekouni" (which apparently, literally means 'shaking the house') prior to the Persian New Year (which falls on the first day of Spring); and/or the Jewish tradition of cleaning the home prior to Passover.

My Mum says perhaps it's because the dust is that much more visible in bright sunshine... Not of course that there's so much as speck of dust in my house of course...

Well, maybe some. It depends how closely you look :)

It's a long way off needing the Kim & Aggie treatment, but nonetheless a little 'Spring Clean' probably wouldn't hurt our place. Plus, in addition to the clean, I'd also really like to clear out some of the 'stuff' we've accumulated over the last year.

So I'm planning to get the family involved - (erm - the baby's exempt (she's got a note from her Mum excusing her)) but I don't see any reason why my eldest can't lend a hand too.

If you, like me, think a little Spring Clean is in order, but you don't see why you should be the only one to suffer it (and indeed why should you?), I've pulled together a few tips to try to make the process as family-friendly and as painless as possible: